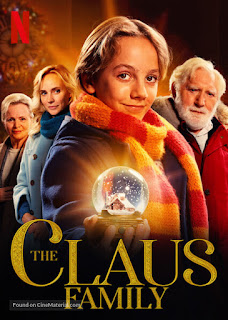 Just as a number of Hollywood productions with 2020 release dates got pushed to streaming, quite a few foreign films intended for theaters were picked up by streaming services hoping to expand their customer base internationally. A side effect of this is a number of movies that would otherwise never have seen US releases are readily available, offering a glimpse into how other countries view Christmas media.

In this case, that apparently boils down to a fairly by-the-numbers knock-off of English language holiday fare. De Familie Claus (I'll call it "The Claus Family" going forward, since the title isn't getting mangled) is a live-action Dutch language kid's fantasy/dramedy from Belgium about a kid discovering he's the secret heir to the Santa dynasty. If that sounds like Arthur Christmas, you're both right and wrong: there's a hall of Santas set more or less directly lifted from that movie, but they've otherwise deviated from the formula, particularly by removing everything that makes Arthur Christmas interesting or good.

I'm being a little harsh. To be fair, The Claus Family has a great cast and some gorgeous set design (at least until they start leaning on CG for parts of Santa's workshop). The overall look of the movie is good, and - to its credit - the movie doesn't indulge in cheap jokes to manufacture laughs.

The story centers on Jules Claus, a boy whose father passed away the prior Christmas Eve. His family just moved to be closer to his grandfather, Noël Claus (yes, seriously), who owns a vintage toy store. Also of significance is Jules's mother, who's taken a job with a cookie company that's on the verge of bankruptcy due to its owner's obsession with tradition over change. Jules also has a younger sister who doesn't impact the plot at all and a 15-year-old babysitter, who exists to give him sagely advice.

You can basically ignore everyone except Jules and Noël, who is (surprise, surprise) actually Santa Claus. Well, technically he's the last Santa: he'd retired and handed the job over to Jules's father just before said father died in an accident on Christmas Eve. And if you're thinking, "Oh, that's going to come up and actually get interesting," you're giving this thing far too much credit. I assume there was some earlier version of the script (or, hell, maybe even an alternate cut of the movie) that went there, but this never tells us anything about what happened the year before or really even implies being Santa was what killed him. Also, Noël doesn't seem all that worried about Jules's safety when we inevitably get to that part of the movie.

The catalyst for the plot is Noël falling and injuring his arm, costing the Santa operation precious time. The movie tweaks the formula a bit here, incidentally. First, Santa has more than one night - he just needs to gets the gifts into homes by Christmas morning; there's nothing preventing him from hitting some houses a few days in advance. I'm assuming this is a common variation of the myth in Europe, though it's not unheard of here, either - when I was a kid I had a friend whose family used this version to allow them to put out gifts prior to Christmas Eve.

Also, there's no sleigh. Instead, Santa travels the world via a magical snow globe that teleports him into houses. He does have elves helping him, and they're on the short side at just a few inches tall. Also, we only ever see three of them, leaving it unclear if there are more offscreen or if that's the entirety of the operation. It's a very odd choice.

At any rate, Jules agrees to help Noël without fully understanding the situation. He makes it clear he's just helping out this one year, and says (several times, in fact) he still hates Christmas. Noël hopes delivering gifts will change Jules's outlook, and for a while it looks promising, at least until Jules realizes his grandfather has been lying to him.

The movie frames the reveal that there's a long line of Clauses as some kind of twist, but the whole thing feels forced. Did Jules really think his Grandfather was over a thousand years old? Regardless, the whole thing comes to a head when Jules discovers the aforementioned hall of portraits of his ancestors, where he learns his dad briefly held the role. He also discovers a letter left to him by his father, which conveniently resolves his specific issues when he eventually opens it.

He then embraces the role, saves Christmas, and also saves the cookie bakery using teleportation. I'm leaving out a lot about the cookie plot, incidentally: there's this whole "cookie revolution" thing, a love interest for the mother, and a sequence when she's fired before eventually being rehired... A ton of time, all in the service of showing Jules has completed his arc by using the incredible cosmic power at his fingertips to drop a box of cookies off in the White House.

The movie has quite a few flaws, but the largest by far is a confluence of tone and subject matter. The Claus Family is first and foremost framed as a drama. That's not to say there isn't comic relief - there's quite a bit, and I've got some thoughts on that coming up - but the jokes come off as a secondary consideration. This movie wants you to take it seriously and to feel for Jules as he goes on this journey of self-discovery.

Which would be fine if they actually delivered characters that felt psychologically believable. Instead, we're stuck with two-dimensional collections of cliches who just need to hear the right thing to overcome their problems. Stuff like that is passable in farcical children's entertainment, but this clearly wants you to think it's something more. This wants to be touching and emotionally engaging, but none of it connects.

It doesn't help the comedy really isn't all that good. There are a few solid jokes, and some of the character work is decent (again, the cast isn't on the list of problems here), but the comedic relief doesn't do the trick. All it does is draw out an already slow movie.

On a more mixed note, the movie has a weird relationship with gender roles. It actually does a good job paying lip service to women in positions of authority - the babysitter and mother are presented positively, the US president is a woman, and several of the previous incarnations of Santa were female. That said, this highlights a serious issue: women are important in background roles, but don't really have much in the way of character arcs. I like that previous Santas could be women, but that also raises the question of why the mantle was being passed to Jules instead of his more festive younger sister.

On a more positive note, the movie was careful not to gender toy preferences, so that's a plus.

Overall, this one just doesn't work. It isn't awful, and it has a handful of things in its favor, but nothing that comes close to overshadowing the movie's many flaws. You can skip this - it's really not worth the time.