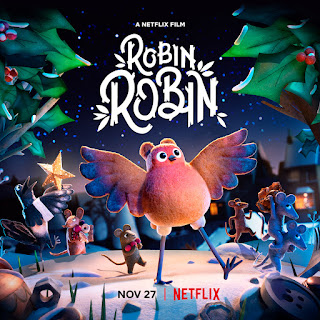 Has animation ever looked this cuddly before? I know there has been other stop-motion work in felt, but this is simply exceptional.

A new musical holiday special from Aardman Animations and Netflix, Robin Robin is available on Netflix, and it's just so dang adorable! The whole thing is animated with fluffy soft felted characters, and the artistry on display is amazing.

The premise is simple: a robin has been raised by mice. The business of mice is to sneak into human houses to steal food. During the first of many delightful songs, it quickly becomes clear that Robin's chirpy, fluttery nature doesn't lend itself to sneaking, but she doesn't understand why it goes wrong for her.

This is a sweet special. There isn't anything unexpected about the resolution, but the humor and music ensure that the ride is thoroughly enjoyable. I'm going to sum up the rest of the plot below, but if you like stop-motion animation or musicals or all-ages media (or all three, like me), just go turn it on. It's only 30 minutes long.

After the first thievery attempt goes wrong, Robin goes out on her own in an attempt to prove herself to her mouse brothers and sisters, although at first all she finds is a cat.

Robin escapes from the cat with the help of a magpie with a broken wing (Robin, naturally, never learned to fly). The two hole up in Magpie's home, a hollow tree surrounded with thorns and just packed with shiny decorations.

He sings about the glory of stuff and tells her about a special thing he's seen in human houses: a decorated tree with a shiny star on the top. The humans seem to get whatever they want from the tree, so Magpie has concluded that the star grants wishes.

Robin says she can use her mouse-taught sneaking skills to get them the magic star and they sneak into the house together. Watching Magpie make a mess by copying her, Robin starts to suspect that maybe her sneaking isn't as good as she thought. After some panicked half-flying, Robin and the star end up back at the cat's place.

The cat sings a song teasing Robin for being a bad mouse and claims the only place she'll fit in is the cat's stomach! After another close call, Robin gets the star back to Magpie's tree home, and they both make wishes on the star. Feeling thoroughly useless, Robin wishes to be a mouse for real.

Of course, the Christmas star glitters and... does not grant these wishes, but in the morning Robin's family comes looking for her. They've all been worried, and Mouse Dad reassures her that she's still part of their family, even if she's not great at sneaking.

Their reunion is interrupted by one last attack by the cat. Robin manages to lead the cat away from the others and escapes through flight at the last moment. The cat and a bunch of Magpie's treasures are swept away down a nearby river.

In the finale, Robin has figured out that her talents are valuable, even if she's not sneaky. Everyone sings a reprise as Robin distracts the humans while the mice steal all the food they could want. Hooray!

Funny, sweet, and gorgeously animated. What else do you want?