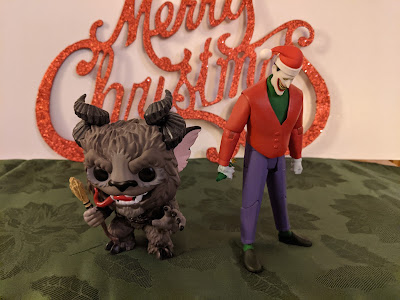 I hadn't intended to spend anywhere near this much time on "Slasher Santa" movies this year. As I mentioned in my top 5 list, I'm way outside my wheelhouse here - I typically dislike slasher movies, and my background in horror remains relatively limited. I only put the list together after being surprised by the number of movies in (or at least adjacent to) the genre I considered good enough to warrant recommending. And while I'd originally intended to just sort of "wing it," I ultimately found myself re-watching everything on the list to confirm my rankings.

In the process of going through all that, I wound up with a few observations I couldn't fit in the introduction. In particular, I noticed that every one of these movies in some way incorporated two related themes: identity and the dual nature of Santa Claus.

Actually, back up a minute. Every one of these except for Santa Jaws. But Santa Jaws is really more a parody of this trope than an example; it would be much weirder if it actually explored the same ideas.

Let's start with identity, because I think it's the more interesting through-line. Every one of the Slasher Santa movies I listed - and nearly every one I've ever encountered - includes either a plot point where another character believes the killer to be Santa or objectively establishes that he is literally Santa. Two of the earliest movie versions of the trope, Christmas Evil and Silent Night, Deadly Night, have the killer believe himself to be Santa (and in Christmas Evil, he's right). This also applies to *SPOILER ALERT* Christmas Horror Story, where we discover the movie's most fantastical story is in reality a slasher Santa running amok in a mall as he acts out a delusion in which he believes he's saving Christmas from a zombie outbreak.

Others stories, such as 3615 code Père Noël and And All Through the House, center on a child's belief the killer is Santa. Meanwhile, in Krampus, Rare Exports, Sint, and Santa's Slay, the monsters are - at least according to some interpretation - a literal version of Santa or Saint Nicholas.

The alternative - movies where a killer merely dresses as Santa as part of a sick joke or to appear inconspicuous - are exceedingly rare. Excluding a handful where someone dons a Santa suit for a scene or two, I can only think of one example where this aspect isn't explored. That would be Silent Night, the remake of Silent Night, Deadly Night, which - unless I'm misremembering (I sure as hell didn't want to put myself through a rewatch) - doesn't provide enough insight into the character's psychosis to clarify what he believes.

On the one hand, this may seem obvious: of course movies centered around a killer Santa will tend to explore the idea that the killer is Santa. But on the other hand... it's not? At least it wasn't to me - I assumed these movies would gravitate towards jokes and gore, which... I mean, plenty of them do that, too, but they still seem fascinated by exploring their premise a little deeper.

And that's a good point to transition to the other theme I saw these returning to: the idea of Santa as both rewarding good behavior and punishing the wicked. In a sense, this seems nearly universal to the genre, since the subtext of someone dressing up as Santa to kill people is, at its core, pretty explicitly based in a form of punishment. What I find surprising is the majority of stories about Slasher Santas ensure there's at least a scene or two where the killer deems someone worthy and offers a gift instead.

I said nearly universal a moment ago because there's a subset of these where the killer doesn't prioritize "naughty" individuals for retribution but instead goes after everyone. Interestingly enough, these are almost entirely the examples where the killers are explicitly versions of Santa: Sint, Rare Exports, and Santa's Slay. In these cases, Santa is basically a force of evil, so he's happy to hurt or kill anything, often preferring to punish those who are good. I want to set these aside for a moment, because their exclusion highlights something interesting about this concept.

While I remain somewhat torn on Christmas Evil, I think it explores this idea in an interesting way. The story is told from the perspective of the killer, and we're given unusual insight into why he acts the way he does. In a desire to become Santa, he rewards innocence and punishes wickedness (which for once isn't equated with committing violent crimes against women, so that's another point in the movie's favor). He's becoming the ever-vigilant myth.

Silent Night, Deadly Night takes a similar (albeit more exploitative) approach. The mantle of Santa functions as a curse which seemingly compels the lead to punish those he views as wicked. In this case, wickedness most certainly carries misogynist overtones, which is one of several reasons I'd advise watching Christmas Evil if you're intent on seeing one (which itself isn't mandatory - these aren't required viewing). Setting aside all of that, Silent Night, Deadly Night does have some interesting things to say about the nature of myth, how it's passed on, and how growing up with myths shapes who we become.

This is the reason I think explicitly supernatural versions of Santa are counterintuitively exempt from rewarding the good: because they come with an established link to the mythos, there's less need to reinforce that aspect. We're told (and shown) the demonic Santa in Santa's Slay is "the real thing," so we don't need to check off as many boxes to sell that idea to the viewer. In contrast, Silent Night, Deadly Night wants us to understand Billy is, at least in a sense, Santa, so we need to show him embrace the light, as well as the darkness, even if his understanding of both is warped by his upbringing (God, I wish that hadn't been a misogynistic, dull mess - there are actually some good ideas buried in there).

This genre regularly plays with the idea of making the Santa myth real, and immediately explores the darker aspects that implies. While my opinions of the individual movies using this trope vary immensely, I'll be the first to acknowledge as a whole these are significantly more thoughtful than I expected. And, as yesterday's list illustrated, there are some masterpieces in the mix.