Book Review: A Christmas to Fight For 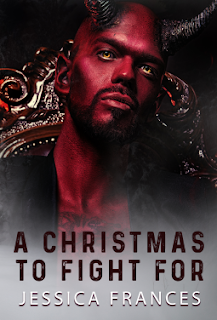 A Christmas to Fight For
Jessica Frances, 2021New Release! A copy of this book was provided by Netgalley for the purpose of review.

I was amused enough by the premise of this book to request a copy for review: a romance between a krampus and a Santa Claus (both appear to be magical races in this world).

And on reading it, I was amused by the book and overall enjoyed it, but I need to address a couple problems.

First, the author advertises the fact that the book was professionally edited, but the book needs another edit. Or better editors. The copy I read had enough typos and mistakes in the beginning that I almost stopped reading (and likely would have were I not planning to review it for this site). Missing words, incorrect verb tenses, and awkward phrases all abound early on. The errors drop off at some point, although they did appear occasionally all the way to the end. I did get this from Netgalley - maybe this copy wasn't final? However, the file didn't say advance or uncorrected proof anywhere I could find it.

Second, in my opinion, the author is a coward. This is Krampus, the Christmas demon: 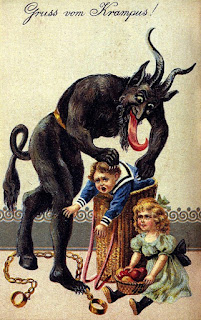 Here are some more modern interpretations: 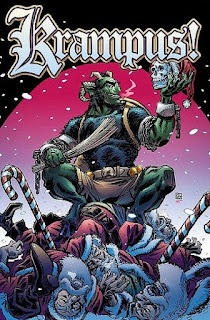 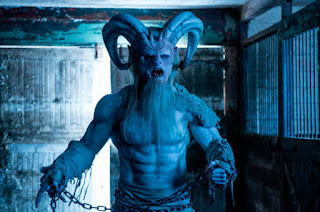 Note the generally bestial/furry appearance. On the other hand, this is the devil (as interpreted by Marvel comics): 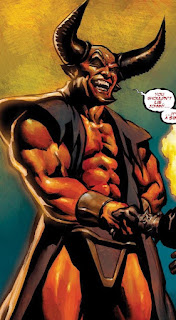 Not the same thing at all! Don't be afraid of more monstrous heroes, author! It felt like a major cop-out for her to describe Claw (the krampus) as essentially just a sexy man who happened to have horns and a tail.

Now, despite all that, this book was pretty fun. Would I have liked more development or explanation of the origins/activities of the evil council running the Santa Claus Organization? Yes, but the very fact that I cared enough about the story to be seeing weaknesses on that level means that the book was pretty good.

Our heroes, Claw and Caspar Santa, are thrown together after Claw tries to assassinate Caspar just as he's been named the new Santa Claus. They each suffer from a bit of insta-lust, but it's put aside as they have to work together to heal from injuries sustained in the fight and later to escape a bunch of elf soldiers. Caspar's painful naivete about the society he grew up in is a bit over-the-top, especially given how quickly he accepts that everything he thought was wrong and Claw is telling him the truth about the leaders' murderous deeds. Claw, for his part, has the ability to sense "goodness," so it's also not a long struggle for him to trust Caspar.

Even with those shortcuts built-in, the story does a decent job portraying how they learn to trust each other and become friends. Adventures follow as they prepare for and eventually lead a secret attack to stop the SCO's evil ways and free the worker-class elf slaves.

Is all of this deeply silly on some level? Sure, but it also has a certain charm. I genuinely enjoyed reading this romp. I found the sex scenes fairly cliche and by-the-numbers, but I read a lot of excellent fanfiction, so I'm spoiled by truly excellent sexy writing.

I'm afraid that this review sounds as though I didn't enjoy the book. I did enjoy it! It was a sweet action-packed story of unlikely love triumphing over evil. I just wish the worldbuilding and the editing had been better.