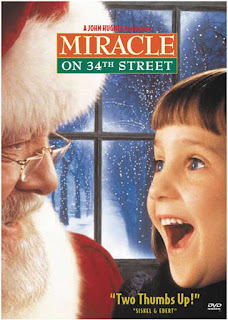 Just want to nip this one in the bud, in case anyone skimmed the title of the post - this is the 1994 remake, not the 1947 classic. I reviewed the classic (albeit briefly) back in the first year of the blog.

That said, you can't examine this remake without considering the original, so I rewatched the '47 film before putting this on. And... wow, there's a noticeable difference. It's like comparing apples to oranges after one of those two pieces of fruit passed through the digestive track of a reindeer.

Let me slow down. I'm being unfair to the '94 movie, which actually does have several merits. The two key cast members, Kris and Susan, are well cast in Richard Attenborough and Mara Wilson. Both did good work in their roles and manage to salvage the experience of watching this...

...Assuming you've never seen the original film. Because if you've seen the original, it's physically painful to sit through this thing. It's not so much a question of the movie being good or bad as it is one of sacrilege. This is insulting to its source material and to the intelligence of everyone watching.

Broadly speaking, the outline is mostly identical, though there are a number of new subplots, and the resolution was overhauled. Like its predecessor, this starts with Kris discovering a drunken man getting ready to play Santa in a department store parade. Note I said "a department store," rather than "Macy's." Apparently, the iconic store decided they were too good to participate in this remake.

This time there's a bit more going on. The department store, now called "Cole's" (I have to wonder how Kohl's felt about all of this), is on the verge of bankruptcy. A rival store, Shopper's Express, is trying to buy them out. It's also worth noting the CEO of Shopper's Express is a supervillain.

The actor looks and acts like he's auditioning for the role of Kingpin a few decades early. For what it's worth, he'd have been great in the part. He's even got a pair of minions who feel like they should be on Lex Luthor's payroll (the '78 Lex - later incarnations of Luthor would have had them shot for incompetence).

The supervillain's here in order to intensify the melodrama and to give the filmmakers cover for wedging in a handful of generic morals. See, this was made in the '90s, when everything was required to have a hamfisted message about the evils of greed and/or commercialism.

Kris takes a job at Cole's and disrupts the status quo by sending shoppers to other stores when it's in the best interest of the children. The goons from Shopper's Express try to hire him, but he turns them down. Meanwhile, he becomes involved in the lives of Susan, Dorey, and Bryan (i.e.: the kid, her mom, and the lawyer). This time, the romance between Dorey and Bryan is far more significant, requiring a tedious side-story that follows their date and culminates with Dorey flatly refusing to marry Bryan when he proposes unexpectedly. Bryan, not wanting to go through the depressing exercise of returning the engagement ring, passes it to Kris, assuming he'll be able to find someone who can use it.

Just wait - it gets worse.

After their attempt to recruit Kris fails, the henchmen pay the santa Kris got fired back at the beginning. His job is to goad Kris into attacking him, which he accomplishes by implying Kris is a pedophile. Kris strikes him with his cane, and the whole thing is caught on camera. Kris is promptly arrested, and the story is used to discredit Kris and Cole's.

Horrified by the fact he was photographed in an act of violence, Kris concludes he let down the kids of the world. As penance, he intentionally fails his competency test. Dorey convinces Bryan to take Kris's case, and the hearing kicks off much like it did in the original, with the caveat that everything is now being masterminded by the evil CEO.

Instead of being freed by thousands of letters, the case is won by a combination of a public protest (organized by Bryan), and because "In God We Trust" is printed on the back of a one-dollar bill. Once again a free man, Kris heads out to make his rounds. That night, Bryan and Dorey each receive a letter allegedly written by the other asking to meet them at church, where Kris has left the engagement ring and arranged for a priest to marry them.

Which... sorry. I'm sorry. I'm not even going to dwell on how stupid this storyline is, how insulting this is to both characters, or how idiotic it is they don't even wait to get married until Dorey's daughter is present. I just want to point out ENGAGEMENT RINGS AREN'T WEDDING RINGS. That's all. Let's move on.

This fulfills one of three conditions set by Susan earlier in the movie. In order to prove he's the real deal, she wanted Kris to give her a father, a brother, and a house. He fulfills the third obligation by making some under-explained arrangements with the head of Cole's involving the house the company used for photo shoots, and the last is... er... implied to already be on the way (I guess Dorey became pregnant after she and Bryan were married, which in turn took place after midnight on the same day he won the largest case of his career but before they woke up early Christmas morning... busy 24 hours).

The movie ends with Cole's in good financial shape (not to mention holiday bonuses all around), everyone believing Kris is Santa Claus, and the evil CEO thwarted (his minions, on the other hand, have converted to accepting Kris Kringle as their personal Lord and Savior).

I can almost sympathize with the filmmakers regarding the changes they made to the story. The original ages so well, they'd have been in danger of making a shot-for-shot remake if they hadn't made some major alterations off the bat. But the vast majority of these changes are awful and unnecessary - they really only needed to make one change to their production:

Of all the changes, the addition of a supervillain is probably the most idiotic and paradoxically the least obnoxious. He doesn't elevate or improve the movie, but he's more entertaining than anything else they wedged in the narrative.

On the other end of the spectrum, the expanded love story is the most irritating change, despite being the best idea on paper. Arguably, if the couple had any chemistry together, it could have worked. Unfortunately, that wasn't the case. Dylan McDermott, the actor playing Bryan, was fine in the court scenes, but I didn't buy him as a romantic lead opposite Elizabeth Perkins. For what it's worth, I kept thinking McDermott would have made a great Punisher battling the supervillain. Pity they didn't make that instead.

But all this plot stuff amounts to nitpicks and minor complaints - I've got much larger issues with this movie. Let's talk tone. First, it's wildly inconsistent. Some scenes mangle the comedy of the original into slapstick, while others lack any self-awareness and are painfully melodramatic. To be fair, there's definitely humor to be found in some scenes, while others are truly tragic. Unfortunately, it's the dramatic scenes that are funny and the comedic that are sad.

Those are big problems, but we're still not at the biggest problem. The sin this movie makes I consider utterly unforgivable is this: they didn't even understand the movie they were remaking.

Okay, when I say that, I'm assuming the thematic issues were the result of a misinterpretation, as opposed to a deliberate choice to change what the story's about. But I'm trying to be generous here because if they did this on purpose, it's far worse.

The original movie and the new movie are both about belief, but they're not remotely the same kinds of belief. The 1947 movie touches on metaphysical questions about the nature of identity and being, as well as the real-world impacts belief and wonder can have.

I'll put it another way, in that movie, Kris Kringle physically acquires and gives a single present - an X-ray machine he donates to the doctor who was looking after him. Mundane explanations for every other gift attributed to Santa Claus are given. Kris doesn't break into anyone's house - he doesn't need to. Telling parents where to buy the toys their kids want is enough.

The original Miracle on 34th Street features several miracles, and it dissects them, one by one. We see how Kris, simply by acting kind and believing in himself, is able to disrupt the city and make it a better place. He doesn't need to fly from rooftop to rooftop to deliver toys to millions of children - he has a better method. It doesn't outright say the reindeer and elves are imaginary, but there's a reason the movie takes time to show Kris teach Susan how to play pretend.

All this is thrown out in the remake, which embraces a crasser, less nuanced understanding of belief. Here, Kris is a stand-in for God, for Christianity, as evidenced by the new "In God We Trust" ending. Now, it's about changing minds and getting everyone to come together to bear witness to a single truth. This is about the inherent goodness of faith overcoming the evil of money.

And that's so much less interesting. Reducing Santa Claus to a lesson in blind belief rather than a symbol of wonder is the absolute worst direction to take the character.

Overall, this movie still could have been worse. It featured some solid performances and even a few clever moments. But none of that makes up for the failures in construction or the dumbing-down of the ideas of the original.

I don't care how many times you've already seen it, skip this and rewatch the 1947 version instead. This one should never have been made.
90's Comedy Drama Erin Snyder Fantasy Movie Sucks