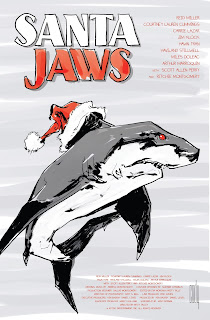 Santa Jaws is a made-for-TV Syfy comedy/horror movie about a magical Christmas shark targeting a specific family during the holidays. So... basically it's an unofficial remake of Jaws: The Revenge. Okay, that's not really true - this honestly has more in common with Krampus than Jaws, and it probably owes more to Stranger Things than either. I figure it's a flip of the coin whether this started with someone coming up with the punny title or listening to the Duffer Brothers talk about how they envisioned the Demogorgon as a shark while making season one.

Shockingly, this has a plot. The main character is Cody, a high school student with dreams of becoming a comic artist. Along with a friend, he's created a one-shot story about "Santa Jaws," a great white shark which devours an evil Santa and wears his red hat on her fin.

His family, however, doesn't seem to understand him. To them, he's just an angsty, inactive teenager unable to fit in. When his principal calls to complain about a short comic Cody drew mocking him, Cody's parents ground him for a week. Already annoyed with a visiting uncle and his ditsy wife, Cody retreats to his room.

Around this time he finds a gift from his grandfather: an antique pen in a case inscribed with something written in German. Cody tries it out by tracing over a drawing of Santa Jaws and quietly wishes he were alone.

Turns out the pen's magic, so Santa Jaws comes to life. One by one, she starts hunting down Cody's relatives and friends, usually while he watches. Similar to Krampus, almost every character is taken after their relationship with Cody is repaired. Cody tries to warn others, but no one believes him at first - a great white hanging out near the docks is already absurd, to say nothing of the other elements of the story.

Because the shark sprang from the pages of the comic, she has the elements and backstory the boys wrote for her. That means she's super intelligent, she has glowing red eyes evocative of Rudolph's nose, she preys on humans, she's attracted to Christmas paraphernalia like stockings, music, and lights, she wears a Santa hat on her fin, and - best of all - she can only be hurt by Christmas weapons.

They learn this when the shark's third victim - the aforementioned ditsy aunt - stabs her through the eye with a candy cane. By this time, Cody's formed an adventuring party consisting of himself, his older brother, his best friend, and a girl he has a crush on. They arm themselves with medieval weapons borrowed from the comic shop owner and decorate them to imbue them with holiday cheer capable of breaching Santa Jaws' protective hide.

While this has a limited effect, they eventually realize they should be weaponizing the magic pen. But by this time it's been stolen by the comic store owner, who wants it for personal gain. This results in a showdown inexplicably at the marina, in which Santa Jaws intervenes. Cody gets the pen, but they lose the love interest, which is unfortunate - she was easily the most interesting character.

Even with the pen, Cody's unsure how to proceed. He doesn't dare draw a picture of the shark getting killed, because he's afraid he'll inadvertently create a second shark (that's... actually a good point). Instead, he tries altering the picture in his comic by removing the teeth then by drawing a massive candy cane spear impaling it through the head.

The shark immediately counters the missing teeth by munching on some ornaments and embedding the shards in its mouth. As for the cane, while it looks like it hurts, it really just leaves her with a massive horn.

Eventually, the cast gets whittled down to just Cody's immediate family, who stage a final battle using Christmas turkeys stuffed with explosives. They lose Cody's brother and father before they get a direct hit. Thinking the shark's dead, they let their guard down, and his mom gets eaten. Finally, it occurs to Cody he should be using the pen to add rules rather than elements, and he arranges a Christmas wish. Then he burns the comic, the shark goes up in flames, and...

Cut to him waking up the next day, Christmas morning. Everyone's alive, and no one but him remembers the adventure. He burns the comic, anyway, and considers destroying the pen, as well, but decides against it. I think this is supposed to be somewhat ominous, but frankly, I just considered it good sense. Keep the weapon and use it for good, kid.

I could be wrong, but my impression is they set out wanting to make something "so bad it's good," but failed and wound up having to settle for... honestly, kind of good. This certainly wasn't great, but overall it worked as a fun adventure.

It still has a lot of the hallmarks of being a made-for-TV cable movie. If you've become spoiled by some of the better Netflix offerings, you'll find the cheap production values and under-developed characters lacking. But most of the jokes worked well enough, and the story - albeit silly - was surprisingly coherent and internally logical.

This leans much more towards comedy/adventure than horror, and it plays with its holiday tropes proudly. Decorations and music are literally part of the plot - they drive the shark, and for a while they seem to be the only things capable of stopping it. Of course, in the end it takes something more powerful: a classic Christmas movie cop-out through a last-minute miracle.

I wish they'd held back on a few horror tropes (and surprisingly not the ones you're expecting). The ditsy young aunt, for example, was a slapstick concept obviously imported from a B-movie. There's surprisingly little gore in this: most of the deaths occur off-screen. They do include a handful of cheesy deaths I wish had been cut - nothing reminds you you're watching a SyFy made-for-TV feature like a CG shark impaling someone on a dock with a spike.

But for every minor detail I could complain about, there are a dozen really nice twists or gags. I liked that the "new girl" love interest was the action hero, and the family was well-meaning. Like I said at the start, the inspirations for this are fairly on-the-nose, but Stranger Things and Krampus were good foundations to use to ground a gleefully silly premise.

It never transcends being a made-for-TV movie, but within those limitations it pulls off a fun, PG-13-style adventure. I almost wish they'd held off on making this for TV. A few more script revisions, a larger budget, and a little more time, and this could have been even better.
2018 Adventure Comedy Erin Snyder Fantasy Horror Movie