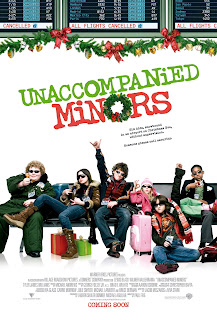 We shifted this to the top of our Netflix queue after seeing it on a list of relatively well-known Christmas movies (Lindsay and I are geeks and therefore completists: the notion there are any famous holiday films we haven't gotten to continues to torment us). We knew the premise, which centers around a group of kids stuck at an airport on Christmas Eve during a blizzard, and felt like we had a pretty good idea what to expect.

Fortunately, we hadn't realized this, unlike damn near every other holiday kids movie, was directed by someone competent. It turns out that the reason all those other movies suck isn't the premise; it's that they're written and/or directed by hacks. This one, improbably enough, was made by Paul Feig. Oddly enough, this is the first of his movies I've seen, despite hearing good things more or less across the board.

Before I get into the film, I want to say a few things about the short story it's based on, a non-fiction piece that appeared on This American Life called, "In The Event Of An Emergency, Put Your Sister In An Upright Position." You can listen to it here, if you're interested. It's by Susan Burton, concerning an experience she had as a child in 1988. It's a brief piece - just nine minutes long - and it's more reflective than funny. The setting and some of the themes were reused, particularly those relating to children of divorced families. But several other factors shifted for film.

Of course, they modernized it, which isn't too surprising. They also moved the storm up two days, so the characters were stuck the day before Christmas instead of the day after. The more troubling alteration concerns the gender of the POV character. Like in Burton's story, the main character is traveling with a younger sister, but in they movie they made the lead a boy. To be fair, this is really a new story loosely based on Burton's account, but it's still a problematic choice.

Given Feig's subsequent career decisions, I'm going to go out on a limb and guess he probably wasn't the cause for the gender swap. It feels like a business decision made for the usual sexist, short-sighted reasons. Pity: the movie was actually pretty good, and a female lead might have helped it stand out from the sea of inferior productions with similar premises.

It's worth noting that, while the lead is a boy, the extended cast is more of a mix. Two of the four kids who get the most screen time are girls, and the movie does a solid job subverting gender stereotypes.

There's not a huge amount of plot to this thing beyond the premise. On December 24th, a large number of kids, mostly from divorced families, are stuck while flying alone during the holidays. They're corralled into a crowded concrete room, which a handful of them escape. The five who ran off are eventually caught and returned to the room, which has now been emptied. The other kids were all taken down the street to a hotel to spend the night, but these five are told they'll be stuck in this room as punishment.

The aforementioned lead, wanting to get a gift to his kid sister so she doesn't think Santa abandoned her, comes up with a plan to break out. One of the kids takes off on a personal journey of self-discovery revolving around finding a Christmas tree and moving past his Aquaman action figure. The others more or less stick together, trying to outmaneuver the head of Passenger Relations, played by Lewis Black. If you've ever seen Lewis Black's routine on The Daily Show, you know exactly what to expect here: he's funny, but they didn't ask him to leave his comfort zone.

The usual shenanigans ensue, complete with heists and slapstick sequences. The kids eventually make it to the hotel and deliver a doll they found in the Unclaimed Luggage warehouse before finally getting caught and locked in separate rooms. They escape pretty quickly, using walkie talkies equipped with cameras. Instead of causing more mayhem, they set out to decorate the airport and try to give everyone the best Christmas possible. Lewis Black finds redemption, as well, and dresses up as Santa Claus.

There are a handful of subplots, including the main character's eco-friendly father borrowing a Hummer to reach them and the weird kid locating a Christmas tree. The supporting cast is composed of various recognizable comedians: few get much time to shine, but it's an impressive assortment.

The movie isn't perfect by a long-shot. Plenty of the jokes fall flat, including a couple fart gags and some that come a little too close to fat-shaming kids for comfort. But, that being said, the comedy works more often than not, including several genuinely hilarious scenes. The kids' characters were well developed, and the young actors delivered solid comedic performances.

The more sincere aspects were almost lost among the jokes, but just enough of the film's central theme - of finding a family when one isn't present - makes it through to work without getting sappy. It's a good movie, far better than its thirty-one percent score on Rotten Tomatoes would suggest.

Despite the hijinks, this is closer in spirit to The Breakfast Club than Home Alone. It's a solid holiday kids movie, and - while I wouldn't list it among the all-time best Christmas comedies - it's far more enjoyable than most of its peers aimed at this age bracket.
00's Comedy Erin Snyder Highly Recommended Movie