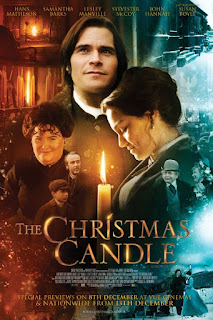 I know, I know. I generally try to keep this site in PG-13 territory. Though it's generally agreed you can say the F-word once before something stops being PG-13, so I guess I'm still fine.

You know what? Fuck it. This fucking movie distributed by Rick-Fucking-Santorum's fucking production company can go fuck itself. Because, for about half its run time - maybe more - we were on board. We were engaged, intrigued, and curious to see where it was going. Then, in the last act, a magical Christmas angel gathered up all the good-will the movie had pulled together and took a steaming Christmas shit on it.

There. I just synopsized the whole movie for you without dragging you through the bullshit plot twists and reveals. Now go. Get out of here. Stop reading.

Seriously. Get. Why are you still here? Why are you still reading? Is it because you heard Sylvester McCoy, the seventh Doctor and Radagast the Brown has a minor role in this thing? Or are you really curious about Susan Boyle's film debut?

Here's the long version. It's sometime in the late 1800's or early 1900's, and a pastor is hired to come to Gladbury, a rural town where an angel appears once every twenty-five years to bless a candle made by a particular family of candle-makers, who then give it out to someone in need. The pastor doesn't know any of that when he accepts the job, incidentally: he's actually freaked out when he discovers the townspeople all believe that crap.

There are a dozen or so minor characters. Go to IMDB if you want a damn list - aside from three or four, the details don't matter. The important part is that they all want something. They want miracles, though most only need a little help.

The characters I only wish I could skip are the love interest with an interest in electrical lighting and the old couple who make the legendary candles. The love interest's dad is sick with consumption (the same disease, we later learn, that killed the pastor's wife and daughter years before).

As for the candle-makers, they're getting up in age and their sole heir lives in London, where he owns a company that makes light-bulbs. I'm also obligated to mention that the pastor had a run-in with his former mistress, now pregnant with his child, before coming to Gladbury. *Spoiler Alert* This is one of the twists that will help spoil the damn movie.

On the appointed night, the angel appears and blesses the candle before the candle-makers' eyes. They resolve to keep it for themselves and use its power to compel their wayward son to come home and take up the family business, since without an heir, the town's legacy will die. When the husband goes to grab the candle, he trips, knocks over the stand holding it and twenty-nine others, and they lose track of which one it is.

Concluding this is God's punishment for their transgression, they resolve to give out all the candles to different townsfolk, telling them each that it's the magic Christmas Candle, and that it's to remain a secret.

Meanwhile, the pastor doesn't buy into any of this. He sets out to demonstrate that what people really need is help, not miracles; that the light of God works through us, not on us. He goes to everyone who asked for something and tries his best to give them what they need: a fixed roof, a lost goat, and so on and so forth. Others, touched by his example, pitch in.

At this point, we didn't know what to think. There were supernatural powers at play, but there was a real sense in which the town seemed complacent and addicted to that power. They prayed for things they could have possibly acquired on their own or for each other.

More than once, I found myself wondering if this was more than a little satirical. Especially when the pastor's past was explained, when he said he didn't believe in miracles, and when he started asking some pointed questions. Why this town? Why once every twenty-five years? Where was a miracle when his family was dying?

He tries to help the town in mundane ways. He wants them to overcome their superstitious attachment to the candle myth, so he has the church wired with electric lights. But he ignores the electricians recommendations and installs more than he should, so they blow up when he turns them on in the middle of service.

This scene was hilarious - everyone started freaking out. Then, one of the old men had a heart attack. Still kind of hilarious, actually, though in hindsight I don't think that's what they were going for.

The pastor becomes despised and isn't sure what to do. He feels responsible, but at the same time believes the town is stuck in the past. So he mopes around for a bit.

After the old candle-makers give away the candles, they discover the one that was blessed actually rolled under their cupboard. They decide this should go to their son, so they drop it off at his office. He finds it and stops by to return it. He's got no use for superstition, but he knows what it means to them. They finally decide to give it to the skeptical pastor.

He pockets it, but first discovers they've been handing out duplicates all over town. He confronts them then starts to reveal their deception at service. However, as soon as he starts, the people around town begin revealing the miracles that have touched them. The majority are completely mundane, but there are a few that strongly imply divine inspiration.

Meanwhile, remember that pregnant woman I mentioned earlier? The one secretly carrying the grandchild of the candle-makers? The pastor had sent for her earlier in the movie, and her carriage is coming in Christmas Eve when it overturns in a blizzard. The driver leaves her to get help, and the pastor and his love interest return. But it's dark, cold, and there's a tree in the road. How will they ever find her?

In an act of faith, they light the Christmas Candle, which radiates with the pure light of a white lantern ring, forming a magic bubble protecting them from the storm and leading them to her. They take her back to the village and introduce her to the candle-makers who seem to adopt her or something.

And the pastor has learned to believe in the power of miracles, to not lose faith in prayer. Because now he's seen miracles in action, so they're real, and Susan Boyle can lead the cast in a song over the closing credits.

And of course no one ever answered the pastor's questions. If God really grants miracles, then where was God when his wife and daughter were dying? Was that really less significant than finding that one weird woman a husband? And, while the pastor goes on to embrace the town's traditions and abandons his well-meaning but ultimately arrogant attempts to bring the church into the future, I can't help but reflect on the fact that, while God left his family to die of consumption (or as we now call it, tuberculosis), medical science has since developed vaccines and treatments. We've developed miracles that are less limited.

I'm not trying to make a case for atheism (a term I've never self-identified with) - I'm just pointing out the obvious gaping hole in the movie's logic. The odd thing is that it seemed to prod that hole. It introduced the metaphor of electric lights standing in for progress and candles - angel-touched or not - for tradition and faith. They posed the inherent, obvious question: why do bad things happen to innocent people? But they didn't answer any of that. Instead, they used computer effects to make a candle magic and light the way, so the doubting pastor - confronted with evidence that low-powered supernatural power was being tossed around arbitrarily - stopped questioning altogether.

But that's fucking bullshit. Headlights would have worked better, anyway. If God exists, you'd hope He has a better explanation for the existence of evil than - HEY LOOK OVER THERE AT THAT SHINY THING!
2013 Dramedy Erin Snyder Fantasy Movie Sucks