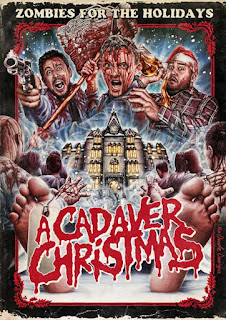 We've had this one sitting in our DVD stack for more than a year after picking it up for a buck or two at a dying video store. We meant to watch it last year, but decided at the last minute we didn't want to devote our limited time and energy to something that looked quite this unpleasant.

We assumed too much. A Cadaver Christmas is far better than I'd seriously hoped for. It's not a great movie - 'good' might be pushing it - but it's a solid low-budget indie horror/comedy. In fact, as long as you preface it with 'low-budge' and 'indie,' you don't have to qualify the label 'good' any further. Within its limitations, it's a resourceful, fun movie.

The back of the packaging describes it as "A cross between 'It's a Wonderful Life' and 'Night of the Living Dead'", which I think is more than a little misleading. I'd describe the zombie aspects as being more in the vein of Evil Dead 2 than Night of the Living Dead. The reference to It's a Wonderful Life centers around a single character who spends the movie drunk. In the opening scene, a bartender alludes to this character undergoing an annual yuletide suicide attempt, which I take as a subtle nod to George Bailey.

We meet these two for a few minutes, sitting together on Christmas Eve, when the movie's hero walks in. He's got a name, but everyone calls him, "The Janitor," almost like he's a superhero (which, in a sense, the movie makes him into). When we first see him, he's covered in blood and irritated. The bartender refers him to the bathroom, then calls a friend he thinks is a cop - we'll later learn he's left the force, though this is less a plot point than a joke.

Most of the characters are essentially jokes; only the Janitor and drunk live long enough to start getting any development, and even then only just a bit. This isn't necessarily a problem - the movie is more interested in entertaining us than engaging us emotionally, anyway.

In addition to the cop, some shambling corpses follow the Janitor into the bar. He manages to subdue them and offers some backstory. He works at a nearby University and was attacked by a bunch of cadavers. He resists other characters' instincts to dub them zombies, though he eventually makes an exception for faster, still living versions they fight towards the end.

The cop freaks out and refuses to believe what's happening. He forces the Janitor to take him and the others to the University at gunpoint. The cop also has a suspect he arrested for bestiality in the back of his car, so he's dragged along, as well.

The group is separated, and they run into various mishaps. There's also a rather stupid scene where the suspect has sex with a corpse, which of course turns out to be undead. Most of the comedy in this worked for us, but this seemed aggressively idiotic.

Eventually, they all meet up with a student security guard, but she's not with them long. They find notes in a professor's lab explaining the outbreak - it's an experiment gone wrong, of course - then quickly start getting picked off. I was actually a little surprised how long it took them to start killing characters, but the movie works its way through the cast pretty quickly once they get going.

In the end, it comes down to the Janitor and the drunk, who's been bitten by a zombie. They kill what they think are the rest then have a moment where they reflect on the holidays. The drunk then reveals his bite and asks the Janitor to kill him quickly. He almost does, before stopping at the last minute to make sure the wound's infected. Much to both their surprise, it's actually started to heal: the copious amounts of alcohol he'd been drinking all movie killed the infection.

They're relieved for a moment or two before realized they just killed a dozen or so infected individuals they could potentially have saved, including several of their friends. Oh, and there's really no evidence they didn't simply murder those people.

The movie's resolution continues this story-line into the closing credits. This sequence was actually my favorite in the movie: arguably, there were more twists here than in the film itself.

The movie's synopsis doesn't really offer a sense of the experience, though. This plays out as sort of a throwback to 70's grindhouse pictures, both in the artifacts added to make it look like old film stock (cigarette burns, scratches, etc.), and in the writing. It works pretty well overall, though it's hard to deny this joke wears thin over time.

The movie's as much parody as homage, with characters directly challenging genre conventions. More than once, minor characters bring up the option of simply leaving, only for the leads to look at them like they're idiots. Again, this kind of thing gets a little tired by the end of the movie, but it works often enough to sell the conceit.

The effects are impressive given what I assume was a very low budget. It's a grisly, gory movie, though the end effect is (intentionally) much more silly than gross.

The Christmas elements are a little difficult to identify in some cases. There's a decent amount of surface stuff - warped holiday music, weaponized decorations, and zombiefied carolers - but there may be more going on here. Specifically, I'm thinking about the archetypal situation, where characters survive Christmas Eve, one of the darkest nights of the year, to emerge with a new outlook on their family and friends. This conceit is used quite often - Die Hard is a principal example, though it's really a variation on A Christmas Carol.

But it's not at all clear whether the filmmakers were considering any of that. Characters surviving the night is also the basic premise of Night of the Living Dead and countless other zombie movies: there's no reason to assume they were conscious of the subtler holiday connections. Regardless, it works on that level and further provides a bridge between zombies and Christmas.

Ultimately, this is an impressive low-budget throwback to cheesy horror flicks of the past. I definitely wouldn't recommend it to everyone, but if the concept sounds appealing to you, I will say this was much, much better than I anticipated.
2011 Comedy Dark Comedy Erin Snyder Horror Movie