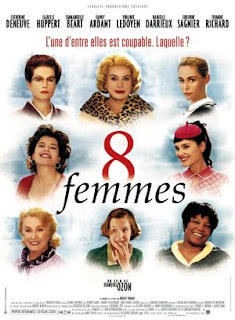 Stop me if you've heard this one: a family gathers for Christmas, but there's tension in the house. A person is murdered, and everyone in the house is a suspect. The denizens of the house are cut off from help, so they investigate each other, where all secrets, sexualities, and torch songs will be revealed.

That last bit was a little different than you expected, maybe?

8 Women (aka 8 Femmes) is a French movie, and, if nothing else, it is artful, passionate, surreal at times, and fascinating. It's adapted from a play, and obviously so: it takes place in one location, with a cast of just eight women. There is also the one man at the center of the mystery, but the focus is on how all the women orbit this man, and he remains a cipher. The actor has no lines and is never seen from the front.

The play is set in a Hollywood version of the 1950's, and it shows in the costumes, the story and the music. The costumes and set are sumptuous, and the setting may also prepare you for the delightful amount of extreme melodrama, if you are a certain kind of film fan.

Each of the actresses plays a stock character of a sort: the sweet ingenue, the mischievous kid sister, the dignified lady of the house, the astringent maiden aunt, the devoted, aging matriarch, the caring, down-to-earth cook, the seductive young maid, the dangerous exotic dancer. The intrigue in the plot comes from each of these people in turn being revealed as being something quite other than they appear. Each character also gets a song, a surreal monologue to show more of their situation or personality.

Each character has a relationship with the victim, and relationships with the other women. Alliances shift and morph through a long day into the evening. The women challenge each other on their adherence to appearances, their embrace or rejection of standards of beauty, and their romantic relationships with men and with women. Secrets are spoken about the way each of them has been hurt by society or by men, and about how many of them has hurt others, with or without cause.

A selection of revelations (spoilers, naturally): the victim's mother-in-law has been faking serious illness, the ingenue daughter is secretly pregnant, the dancer (sister to the victim) is sleeping with the cook, the maid had been having an affair with the victim before she was hired, the wife was planning to run off with the victim's business partner, the maiden aunt was secretly in love with the victim as well...etc.

I don't know that there's any sort of coherent theme or message here, so much as an exploration of these eight characters and their situation. I sympathized with every character at least a little, even as they tore each other down.

I'm getting bogged down in pathos, because the film is also very funny. It's clever and wry and occasionally surprisingly slapstick. The musical numbers, for all their surreality, are emotional and effective.

The main criticism I have is that at two hours, it is more than a little long, and does occasionally drag a bit. But it was interesting and beautiful to watch and sometimes quite moving. If you're looking for something that isn't quite so uplifting as most Christmas fare, what's more classic than a holiday murder mystery?
00's Dark Comedy Lindsay Movie Musical Mystery