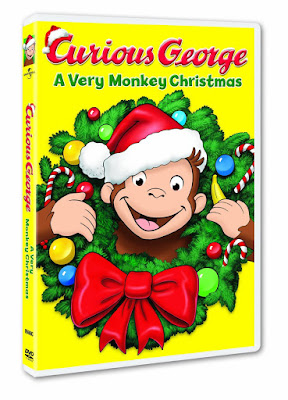 This is adorable. It's adorable and charming and whimsical and sweet. It's fun and it's funny, it's safe for all ages without being insipid.

In short, it's quality children's programming.

I've seen a few episodes of the show this special is spinning out of, because I watch kids' shows on PBS. If my vague recollections are accurate, this is equivalent to an especially good episode.

The special opens with some friendly narration explaining how excited George is about Christmas. Soon he wakes up and runs into the other room to jump on the Man with the Yellow Hat, only to be told that like yesterday, and the day before that, and the day before that, it is not yet Christmas. The Man (it's so awkward to call him that, but take it up with H.A. Rey) gives George a chart to track the rest of the days (12) until the big day, and reassures him that they have a lot to do to get ready, so the time will pass quickly.

Cue the first musical number! It's all about getting ready for the holiday and the different things people are doing. It's not brilliant songwriting, but it's cute.

George and the Man run into most of the recurring characters from the show during and after this sequence to find out how their holiday preparations are going, including some of the other animal-human partnerships: the doorman and his dachshund, the chef and his cat, and two kids and their dog talking about presents outside the toy store.

Talking about gifts brings up the central plot thread of the piece. The Man asks George to point out what he wants for Christmas in a catalog, but George 'writes' a list and insists that the Man can read it. Considering George's art skills, that's asking a lot. Meanwhile, George wants to get the Man something really special, but he doesn't have any money, and he doesn't know what to make.

Funny and clever scenes follow as the days pass. Some examples: George finds out one of the Man's favorite holiday treats and attempts to recreate it with somewhat messy results. The Man takes George to the museum to meet with their genius researcher friend in the hopes that she can help decipher George's list. (Professor Wiseman gets some of the best jokes in the whole special - she's awesome.) George causes a snow machine to go haywire, then tries to build one himself. George's friend Betsy (one of the dog owners) mentions that she's trying to write an original Christmas song as a gift for her aunt, but she's having trouble. In the meantime they also get a unique tree for their apartment (it comes decorated with a free chair!) and run other holiday errands.

George and the Man are both running out of time, and the day before Christmas Eve they each get the idea to follow the other, hoping for a clue to a good gift. That goes about as well as you'd expect. The humor throughout is deftly-handled; we found it thoroughly amusing.

They perform in the community recital where Betsy is supposed to premiere her song, and she's finally inspired to write a funny ditty about a Christmas Monkey.

Finally George has a bright idea and makes his gift, but the Man has a nightmare. He dreams about all the other animal-human partnerships and how well they understood each other, and he dreams a 'what if' that pictures George living with other humans, trying to see whether he would have a better life with someone else. This dream is hosted by the Ghost of Time Going Sideways, by the way.

The dream gives him the key to reading George's pictograph, and everyone has a merry Christmas. A very monkey Christmas seems like an awfully nice thing to have.
00's Comedy Highly Recommended Lindsay Special