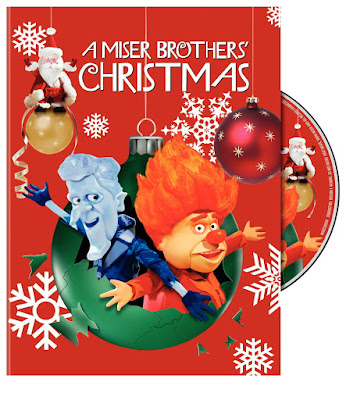 There's a lot of resentment in the air tonight.

I resent the executives who decided to try to squeeze more money out of an existing property. I resent the people who spent months making this. I resent this cheap DVD for existing, and I resent this blog for making me sit through it when I absolutely have better things, even CHRISTMASSIER things, to do with my time.

What I'm trying to be clear about is that there could have been a kinder, gentler version of me that would cut this special some slack.

She is not here today.

The worst thing, beyond the horrible plot and the terrible music (seriously, did they hire a committee of failed third-grade teachers to slap this together?), about sitting through this is that I like A Year Without a Santa Claus.

Erin wasn't very nice to it in his review, but I'm fond of it. I like Mrs. Claus, I like the story, I love the music.

This new special isn't fun, and it sucks most of the fun out of the world of the original.

Fact the first: Mrs. Claus mopes about and acts helpless for 99% of this, despite having a ton of agency in the original. Not okay.

Fact the second: Heat Miser and Snow Miser are completely defanged and diminished, both by giving them idiotic childhoods and backstories, and by adding more children of nature, thereby tempering their powers and giving them less importance.

(Side note: can you call it the uncanny valley when there's something 'off' about a puppet based on another puppet?)

Fact the third: Mother Nature is less badass. Not okay.

Fact the fourth: The new villain, the North Wind, has a goal that is so stupid that I may have to recalibrate my metrics for Christmas-special-villain goals.

Here's the short of it: the North Wind wants to be Santa. Like, he wants to deliver presents and get all the... glory? There isn't really glory involved, or recognition. Santa having no way to know that children cared about him was the whole premise of the first special. The North Wind has no reason to want to own Christmas, he just does. Even in his really stupid song about how he's going to be in charge, he doesn't even claim an actual reason to want this.

So he sabotages a test flight and Santa comes down in the middle of one of the Miser Brothers' squabbles. Santa injures his back and may not be able to make the Christmas run, so Mother Nature, thinking the Brothers downed the sled, sets them to help out while Santa's laid up. They can't get along and destroy half the toy factory until Mrs. Claus shows them a montage of them growing up together, which was saved in the naughty/nice list room. At this point, she also sings the most idiotic song in a special full of poorly written music. It's about "Brothers" and that "Brothers should be friends."

So they agree to get along. Incidentally, they now reprise the Snow Miser/Heat Miser song for probably the third time. Although honestly we expected to hear it more. North Wind tricks them into fighting again on Christmas Eve, so Santa takes the sleigh up after all. North Wind is waiting, and tries to suck Santa into a vortex.

Because we don't have any time in a special like this for plot with all the terrible songs to fit in, the elves and Misers and Mrs. C find out that the North Wind is to blame when a Christmas card featuring the North Wind dressed as Santa blows into the workshop. I guess that's what happens when you let your marketing department get started ahead of the execution of your evil scheme.

At any rate, they ride the other sleigh up, save Santa and catch the North Wind. The Misers agree to disagree and work together long enough to deliver presents.

There was one bright spot in all this: Santa's head mechanic through all this was a lady elf named Tinsel, which is kind of cool. She also proved the first crash was sabotage. You could tell she was a main character, because her eyes were different from all the other elves.

So yes, there were more female elves and elves of color in the background than in older specials, that's nice. But the possibility of Mrs. Claus taking over the gift delivery isn't even mentioned, although she was ready to try it in the original. The incremental nods to modern mores don't save this from being a tedious mess.

We sat through the making-of footage as well, and the sets are pretty, the puppets are well-crafted, and the stop-motion is fine. But the premise is weak, the writing pathetic and the music abysmal.

Keep this one off your to-watch list. I wish it had been left off ours.
00's Comedy Fantasy Lindsay Musical Stop Motion Sucks