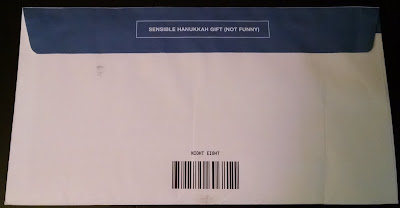 I'd hoped to get to this by Christmas, but the eighth day didn't reach me in time. I just got it today (12/26), so I'm wrapping up this article and posting it now.

I've only played Cards Against Humanity once, and I'd describe the experience as somewhat mixed. Cards Against Humanity is an intentionally offensive card game where players try win points by shocking or disturbing each other. I don't actually own a copy of the game though I do now have an expansion (more on this later).

This promotion ostensibly has nothing at all to do with the game, though. The company advertised that, for fifteen dollars, they'd send people eight "sensible" gifts over the month of December. While I'm not a huge fan of the game, I've been extremely impressed with other promotions the company has done over the years, so I signed up.

I honestly had no idea what to expect. I hoped for something fascinating but half expected eight pairs of socks. 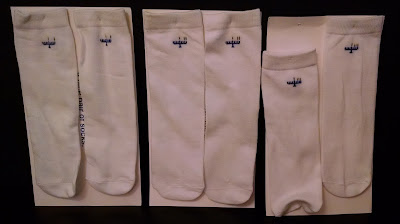 Night One
I got a pair of socks.

White socks, to be specific, with a small menorah symbol at the top containing one lit candle. The socks were attached to a paper card containing a sock-related quote.

In addition, there was some info about the promotion, explaining why these were showing up in case the recipient was getting it as a gift.

There was also a letter enclosed, written by one of the game writers' Jewish fathers. Each subsequent gift contains one, as well. The content of the letters varies. Most, but not all, are typed. I've at least skimmed through these: they're generally clever and some are humorous. About what you'd expect, actually. 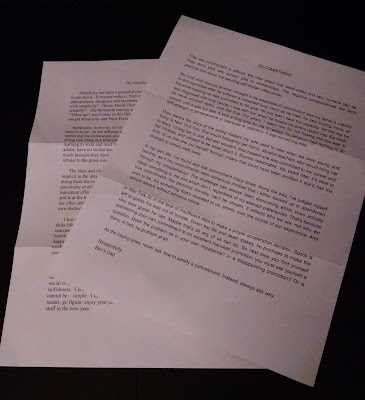 Night Two
A second pair of socks, identical to the first, save that these have two candles lit. There was another quote and a different letter from a different writer's Jewish father. I wasn't entirely surprised at the prospect of getting eight pairs of nearly identical socks. And, of course, I wasn't certain that was what was going on. But it seemed likely.

Night Three
Take a guess. A third pair of socks, this one with a quote against socks attributed to Adolf Hitler. The letter accompanying it was probably my favorite of the batch, featuring some geeky Star Trek references. I resigned myself to the probability I'd be getting nothing but socks for Hanukkah.

Night Four
That's what they wanted, actually. That sense of disappointment, of complacency. But that's when the socks stopped and the promotion got interesting.

Night four essentially had two gifts. The first, which was the "official" sensible gift, was a US Treasury bond valued at $1. In addition to this and the letter, there was also the first part of a "Jew Pack" of Cards Against Humanity expansion. Here's the exterior:

And, here are the cards. This should provide a good sense of the game itself: 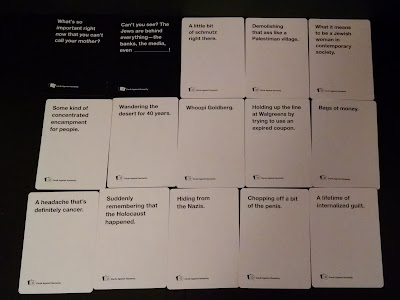 Night Five
The next envelope I received introduced another twist. The gift this time was a little more nebulous: they'd taken the money from Night Five and donated it to Chicago Public Radio, which has the added effect of making Mainlining Christmas an official member of the station. In keeping with public radio donations, we got a membership gift. 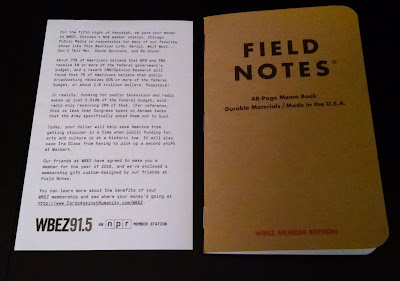 The notebook is a fun addition, but mainly I'm amused by the decision to donate the cash. They were clearly expanding their concept of a gift, and I was getting more and more curious to see where this went over the next three days.


Night Six
If you've already heard about the gifts of this promotion, I'm betting this is the one you heard about. This, like several others, essentially has a two-part gift: the official and the thing they spent money on. The official gift was a newspaper-style page of comics commissioned from cartoonists. Some of these were funny, though I wasn't overwhelmed. Also, the vast majority were about Christmas tropes, which was a little odd given the Hanukkah theme. But who cares - that's not the interesting part. 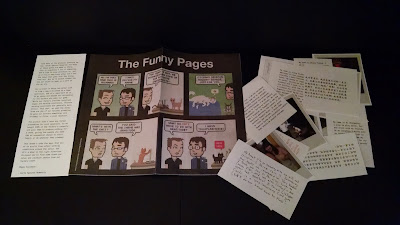 The interesting part is that they took the day's money and essentially paid the Chinese factory that produces their cards to give their workers a week off. Along with the "Funny Pages," they included an envelope full of photocopied letters and pictures from the workers offering brief descriptions of what they did over their vacations.

The information detailing this explains that this is unprecedented, that the factory didn't even have a policy for paid vacations. It doesn't point out that this only cost a trivial amount of money - I guess they trusted us to figure that out for ourselves.

All told, it was a surprising and moving twist to the promotion.

Night Seven
Here's the other one you might have heard of. For night seven, Cards Against Humanity purchased a Picasso titled Tete de Faune. I've read subsequent articles which clarify that this is likely a signed print, one of fifty, not the original. Still, a rare piece from a famous painter. Here's the photocopy they sent me: 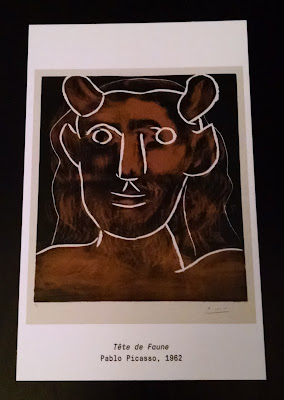 "How is this a gift?" you might be wondering. Well, that's actually up to me and the other 149,999 subscribers. Here's what the back of the card says: 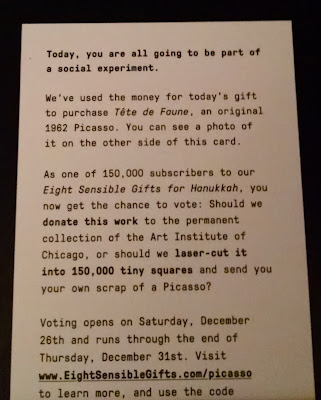 So, depending on how the vote goes, this is either getting donated or chopped up in minuscule pieces and mailed to us.

Based on a quick web search, the conventional wisdom seems to be that everyone plans (or claims to plan) to vote for donation, but everyone expects the vote to go the other way.

In addition to this, they also sent the other half of that "Jew Pack". Interestingly, the front implies this was intended for the fifth night, not the seventh:

Here are the cards contained in this part of the set: 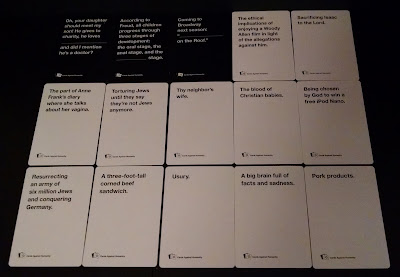 Night Eight
Well. Mainlining Christmas is now royalty. Or, at least we're going to be royalty this August: 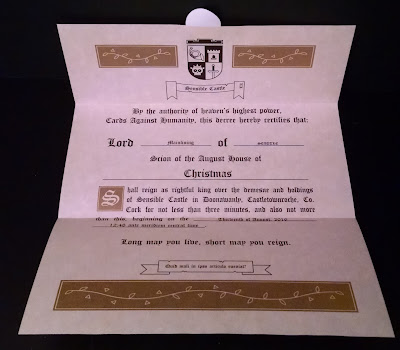 So on August 13th, from 10:48 to 10:51 AM PST (who the hell uses Central?), Mainlining Christmas will officially be crowned the ruling monarch of Castle Sensible, which is apparently a real castle in Ireland. What does this mean for us practically? Bragging rights, I suppose. When we come back next Christmas, we'll have formerly been king of some tiny castle Cards Against Humanity bought.

Aside from the decree, we received yet another letter from a writer's father and a fold-out map to our castle. Sort of: 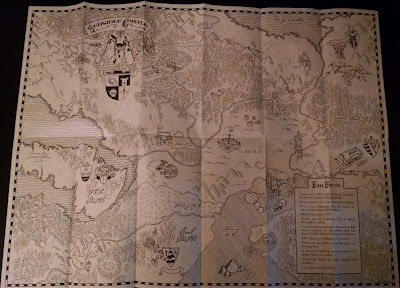 So, it would be less useful for locating the castle (or whatever it is they're calling a castle) than for standing in as a map for a D&D campaign, but - honestly - I prefer fantasy maps to real ones, anyway.


Closing Thoughts
Honestly, this exceeded my expectations. In an odd way, the promotion had a narrative structure, starting with the three pairs of socks, before going in some jarring directions. There was a mix of comedy, shock, and genuine intelligence to the whole thing. Using some of the cash to provide a factory's workers with a week off made a powerful point about how little money it takes to do something wonderful for workers. Holding a Picasso hostage is obviously a bit more controversial - I'll be interested to see how that resolves in a few days. Either way, it's certainly interesting.

Value is obviously a subjective concept in a situation like this, but I absolutely feel like I got my money's worth. Even setting aside the intangibles - the donation to Public Radio, the week's vacation, and the "king for three minutes" - this generated an impressive stack of artifacts I plan on keeping around.
Erin Snyder Hanukkah