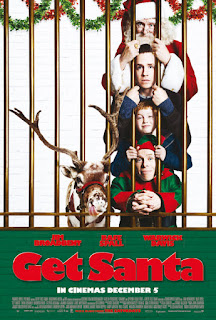 This surprisingly intelligent British fantasy opens a few days before Christmas. Steve is being released from prison after serving two years: he was a getaway driver in a botched robbery. All he wants is to spend some time with his son, Tom, who's terrified his father will disappoint him. After a brief argument with his mother, Tom writes a letter to Santa and places it in the fireplace (a British tradition which frankly makes a hell of a lot more sense than dropping it in a mail box). As soon as the room's empty, a gust of wind carries it up the chimney then promptly takes it to the shed behind his house.


Because that's where Santa Claus is hiding out. After a test flight gone bad, he was knocked off his sleigh. His deer are lost, and he needs help. Before long, Tom finds him and gets the whole story. Santa specifically wants Steve's assistance - he remembers him from when he was a child and believes he'll be able to make things right. Tom calls his father and tells him, and Steve naturally freaks out.

Santa takes off and tries rescuing his reindeer on his own. He's arrested almost immediately and taken to jail. Tom and Steve visit him there, and Santa manages to start convincing Steve that he's the real deal. He sends them on a mission to locate his sleigh, collect the reindeer, and break him out of jail.

Things get worse when they find the sleigh - it's in no condition to fly. By this time, Steve's parole officer is on his tail, along with a number of police. Steve and Tom follow instructions in a book in the glove compartment and locate a portal to Santa's home in Lapland, where they find his elves. Eventually, Steve pilots Santa's old sleigh and helps put things right.

While the premise is more or less indistinguishable from dozens of other holiday classics, the movie stands out due to the portrayals of the leads, the respect they show the mythology, and the attention to detail.

Santa Claus is played by Jim Broadbent, and this isn't his first time in the role. He voiced Santa in the tragically underrated Arthur Christmas (possibly the best holiday movie of the past decade). This version is inherently British, more Father Christmas than Saint Nick in demeanor, though quite a bit of his backstory is drawn from Baum's Life and Adventures of Santa Claus. This is something of a confused and bumbling figure, albeit one with a depth of wisdom and optimism. Between Broadbent's commitment and the script, I don't think I'm exaggerating when I say it's one of the best live-action interpretations out there.

The father-son pair are also well handled, both by the actors and by the writing. Their characters are complicated, and their choices - both right and wrong - are believable. There's a subtlety to their emotions I doubt we'd have seen if this had been an American production.

Same goes for almost all the supporting roles. Warwick Davis gets a fantastic supporting role as a prisoner Santa mistakes for an elf. If you think you know where that's going, get ready to be pleasantly surprised. Likewise, Tom's mother and her new husband are also handled far better than you'd think. Their reactions to the plot are believable, and both characters are sympathetic, despite their limited screen time.

The exceptions are the police on Steve's tail. While they're not awful, they are more or less relegated to comic relief. The actors do good work, but they stand out in a bad way in an otherwise complex film.

That complexity runs to the core of the story: there's a level of depth you almost never get in the genre. There were a lot of moments that surprised me, but none so much as the moment when the immediacy of Santa's delay was brought home. As Christmas Eve progresses, the news starts covering the fact that kids in Sydney are waking up with no presents. Because, unlike every other similar movie unfolding on Christmas Eve, this one considered the international date line.

They do come up with a way to salvage Australia and New Zealand, at least partially, but the fact they thought to deal with the issue in the first place - and moreover respected the audience enough to trust them with the development - should be a point of pride for the filmmakers.

While I liked the vast majority of the movie, there are a few issues I have to address. First, the movie is strongest in the first and third acts: the second drags a bit. Also, there are a few juvenile jokes that should really have been cut, starting with a running gag about farting reindeer. I'd also have been happy if they'd cut Santa's reindeer-poop gun, though the rest of his magical gadgets were awesome.

Yes, this movie absolutely has a few serious flaws. Set those aside, though, and you're left with one of the most thought-out Christmas fantasies ever made, at least in live-action. It's extremely funny and fascinating to watch. The character arcs are fantastic, and I love how they approached Santa's background, powers, and personality.

As someone who genuinely hates gross-out humor, it takes a lot for me to recommend a movie with fart jokes and a poop gun, but this more than makes up for those infractions.
2014 Comedy Erin Snyder Fantasy Highly Recommended Movie