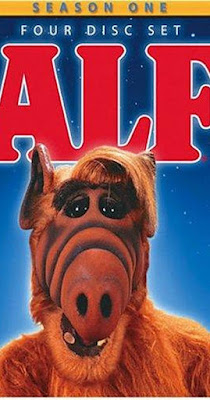 This is the first of two ALF Christmas episodes. We actually did the second one, a double-length special, back in 2010 when we started this blog. For those of you who didn't just click on that link, let me sum up our feelings: we hated it. Despised it, in fact: it was sappy, cliche, and just plain idiotic. With those kinds of expectations, it shouldn't be a huge surprise to hear this episode from the series's first season was better than I anticipated. That's not to say it was good - but, compared to the show's more ambitious attempt, mediocre is a huge step up.

It probably helped that this was earlier in the series. Just as shows with great premises and talented writers tend to get better as they go, those with uninspired concepts and weak writers have a tendency of burning through their one-note jokes almost immediately. No surprise, really.

The premise of ALF is much more on display here. Gordon is an alien lacking in manners, common sense, and shame. The jokes are built around his interactions with the Tanners. It's not at all surprising that this wore out quickly. There's only so many times a cute Alien acting like a dick is funny. I found it getting old by the end of this episode.

But, unlike with the later episode, not by the beginning. For a while, his blunders were kind of humorous this time. Not brilliant, mind you; but definitely better.

The premise revolves around Gordon (a.k.a. ALF) mixing up various Earth holidays and customs. He hides eggs all over the house, much to everyone's dismay. More seriously, he chops the Christmas tree into firewood. Willie, the high-strung father, goes out in search of another but - after balking at the markups on trees still available - he brings home an artificial tree.

The family is horrified by the idea of using a fake tree, leaving Willie regretting his choice. When the rest of them take off to go caroling, Willie comes up with the idea of driving into the mountains and going to a Christmas tree farm. ALF, hoping to see snow, goes with him. Before long, they're lost and stuck in a ditch in the middle of nowhere. ALF cuts down a tree at the side of the road while Willie's sleeping, and the noise attracts a forest ranger.

ALF hides while Willie talks to the ranger. He winds up fined for cutting down the tree, but at least they get the help they need getting free. In addition, they're allowed to keep the tree for some reason.

The episode ends with the family reunited and enjoying Christmas together. ALF ordered everyone random gifts from a catalog, and everyone's happy.

Like I said before, it's streets ahead of the other ALF Christmas episode, but it's still nothing special. There are a handful of good jokes, along with plenty of awful ones, and the serious moments - while not remotely touching - at least stop short of being offensive. On a whole, I'd describe this as pretty typical for sitcoms I've seen from the era. There are far worse things out there, but that's hardly a recommendation.
80's Comedy Episode Erin Snyder Science Fiction