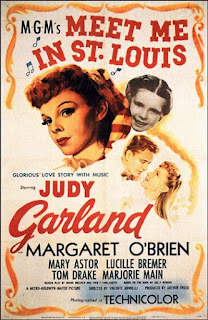 I read and watch a lot of things. Most of us do, today. Which is why it's so special to find something I've never seen that is this magnificent.

I had a general awareness of Meet Me in St. Louis. I know the Trolley Song. I know the history of Have Yourself a Merry Little Christmas (more on that later). But I'd never sat down and actually watched the movie.

Now I want a copy to put into permanent rotation. This isn't just me speaking as a lifelong fan of movie musicals; Erin loved this film as well.

For one thing, it's beautiful. The Technicolor is sumptuous, the use of light and shadow evocative and delicate. The sets and costumes are extremely detailed (it is a period piece, after all).

The writing and performance is wonderful. The script is clever and quick and the comedy hasn't diminished with time one smidgen.

The plot is simple and charming. It's based loosely on a series of short reminiscences about living in St. Louis in early 1900's, and follows one family through the year leading up to the 1904 World's Fair. While their troubles may not ever be so terrible in the scheme of life, there is a lovely sincerity and realism about the way the cast approaches each situation.

The main characters are the four daughters of the family. There's also an elder brother leaving for college, a caring and pragmatic mother, a distant but loving father and a grandfather and a cook.

The two older daughters' misadventures in love are funny and sweet; Rose (Lucille Brenner) waits for a long-distance call, but keeps her options open, while Esther (Judy Garland) tries to win the notice of the boy next door. The two younger girls, meanwhile, are written hilariously throughout. They are morbid and callous in the way young kids often are, particularly the youngest, who holds funerals for her dolls and declares that her Halloween costume is a horrible ghost who lies unburied. Much of the plot also revolves around the father’s distance from the family and whether he will move them all out of state for his job.

Most of the music is integrated into the world, in a time and place where people sang in public more often than they do now. Often movie musicals step into a surreal place where whenever a character is expressing themselves through song, the viewer understands on a certain level that if the situation were real, the song would translate into an internal monologue or an emotional conversation. It wouldn't really be a literal song. That isn't the case here. Much of the time the instruments are physically there. The characters singing are actually singing, in the way you or I might sing in the shower or in the car, (or with friends or by yourself, if you are/were a musical person like I am). The songs that weren't written for the movie date from the time it takes place.

There are two scenes I want to point out particularly, both because they're very strong, and because one is the reason we watched this movie in the first place.

The second season depicted is autumn, and there is a long sequence set on Halloween. This was absolutely fascinating. I have no real reason to doubt any of the events as depicted, but I have never before learned so much about the history of Halloween celebrations at the turn of the century. Margaret O'Brien as the youngest daughter, called "Tootie", absolutely steals the show with a creepy, beautifully filmed sequence.

The climax of the film falls at Christmas. The family may be leaving their home, leaving their friends, and possibly even leaving each other. It's then that the world is introduced to the song Have Yourself a Merry Little Christmas. You may know that there are a few alternate lyrics to the song, and this is why. In the movie, Esther sings it to Tootie, and it's a song about both hope and loss: the hope that next Christmas will be better than this one and the fear that life won't ever be that happy again. The songwriter originally even wrote a more depressing version, but it was deemed too downbeat for the film. As it stands, it's a beautiful and moving scene, although I admit to being briefly distracted by how lovely Judy Garland's scarf is.

The final scene (of the World's Fair in the spring) is a bit lackluster compared to all that comes before it, but still sweet.

Put this one in your Christmas rotation, or your Halloween rotation! Either way, we think you'll enjoy it.
40's Dramedy Highly Recommended Lindsay Movie Musical