Reflections On Another Christmas Gone 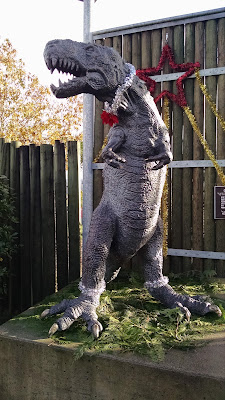 It was a close one this year, what with the Grinch armed with a machine gun holding Santa Claus hostage in the old McCallister home. For a while there, it looked like Christmas might have to be cancelled. But some quick thinking from Dooley and the Christmas Narwhal saved the day, and...

You know what? I don't need to recap this. You caught the news last night; you know the gifts were delivered, the Grinch is safely back in Arkham, and Santa Claus destroyed that asteroid before it reached orbit. We don't need to go over all the details or spend more time mourning Donner.

What matters is Christmas 2015 came on schedule, and - aside from a few mishaps - it was a merry one. Here at Mainlining Christmas, we spent the season as we always do, force-feeding ourselves holiday cheer. Overall, our slate of movies was surprisingly good this year: we really weren't expecting that.

That's not all, though. We hung out with reindeer, marveled at sculptures of Christmas dinosaurs, went to a fantastic concert performed by the Seattle Men's Chorus, and hung out on a beach while carolers on a cruise ship blasted songs over a PA system.

Oh, right - we didn't actually write up any of those adventures. I guess we were too busy with the movies. Well, no time like the Ghost of Christmas Present. 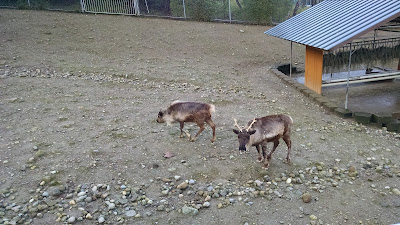 The Cougar Mountain Zoo has a "Reindeer Festival" every year, which is essentially a clever way to extort $14 a ticket to see eight or nine exhibits that aren't closed for the winter. The centerpiece of this is the reindeer, in all their glory.

I'd like to say these pictures don't really do the experience justice, but other than a handful of kids hurling bits of apple at the animals, this is pretty much the extent of this particular exhibit. The male deer were on the other side of the path. They didn't label which were male or female, presumably to prevent contradicting the specials which show Rudolph with his antlers on Christmas Eve (males lose their antlers for the season). 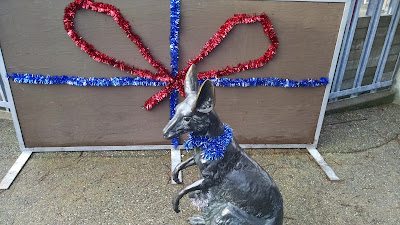 The whole zoo was holidayed up. Well, the portion that was open, anyway. The decorations were somewhat tacky, but you really have to admire the commitment. Here's the outside of the bathrooms. 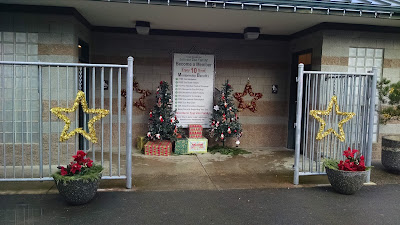 In addition, the zoo made a point of lying to children through the use of these signs. All the animals had them. 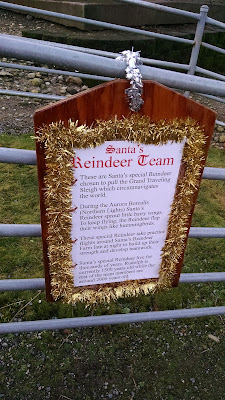 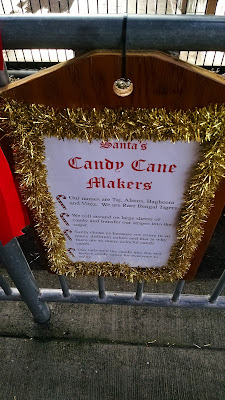 Whining aside, they had the cougars and tigers on display. The tigers were especially active, and that alone was probably worth the entry fee.

This is video we took in Carkeek Park of the Seattle Christmas Ship Festival. The main ship is the one in the center blasting holiday music. The others were smaller decorated boats which tag along with fun. It's a cute concept, but the actual effect is pretty cheesy. I'm sure the singers are talented, but by the time they're run through a PA system and broadcast over the Puget Sound, you lose most of the nuance. Lindsay discovered we could get a really cool effect turning our heads ninety degrees so the echo on the shore created a sort of harmony.

The performance only lasted about twenty minutes. By the end, we were happy to get back in a warm car.

We also got out to see decorations, went shopping, and all that. It's been a full Christmas, and yet... I wish there were more. I know that will seem crazy to most of you. Hell, it seems crazy to me. But it's true: these late Thanksgivings are irritating me. I want more time to enjoy the holiday.

Ah, well. There's always next year. Until then, keep Christmas in your heart (or really any blood-soaked organ of your choice). Hope your yuletide was a jolly one. 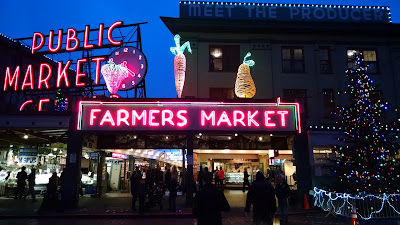