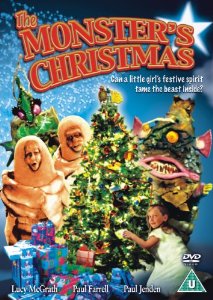 The first thing to know about this television special from New Zealand is that it is poorly punctuated. As there are multiple monsters whose Christmas is at stake, it should properly be The Monsters' Christmas.

Perhaps the first thing to know about it is that not a single member of the cast has enough of a resume to have a photo next to their name on IMDB.

Or perhaps it is that, according to the production/distribution company, the film was "written and planned as a location film."

Or that it features most of its actors in full body monster costumes that are... really not that bad for television in the 80's, I guess?

But really, the main thing you need to know is that this might be, minute-for-minute, the weirdest thing I've ever seen.

It opens with a scene that implies a level of horror and suspense that the movie never reaches again. A little girl is reading a picture book to her teddy bear while SOMETHING creepily lurks outside her window. We need to pay attention to the book, though, because this is most of the backstory we're going to get. Here's the gist: monsters love to sing Christmas carols. A witch hated this, so she stole their voices. To get them back, someone needs to speak the magic words in the witch's cave. But the monsters have no voices, so they can't do it themselves. *sad trombone*

The girl then falls asleep to give us a frame point to return to later, and wakes up and there's a monster! She is very chill about this. She's all like, "Hey monster, we're cool. I like monsters. Did you need some help with that voice problem?" only in little-girl New Zealandish.

Through some grunting and charades, the monster reveals that he can lead her to the witch's wand, which will make facing the witch possible. And they're off. Little girl and person in freaking weird giant suit. Apparently this is the "mountain monster", and occasionally he gives off smoke. 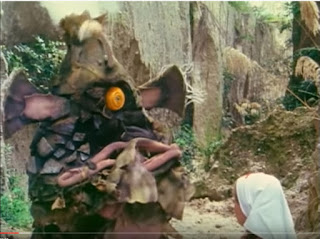 Here's where we started to figure out that "location film" part I mentioned above. Because all of the places the girl and the increasingly weird monsters go are amazingly gorgeous. The incongruity between the super-fake costumes and the majestic vistas is a bit dizzying. The plot is thin and not that interesting, but Erin and I started playing 'Spot the location they probably used in Lord of the Rings' and that kept our spirits up.

After they find the wand, learn that monsters eat pictures, and fight off the witch's lackey, Girl and Mountain monster part ways, and she hikes toward a distant volcano. 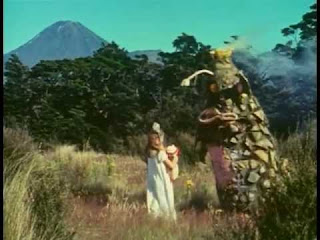 In the forest, she's trapped by a giant-bug-like Forest Monster. There's actually a clever costuming thing here where the actor is walking and moving backwards, giving it a rather alien motion. Well, it works for a bit, then it just looks like a person wearing a costume backwards. Once the Forest Monster realizes she's going to help them, he(?) gives her a monster costume, so she can be a monster too.

She goes on to meet the Mud Monster, actually two people in a conjoined costume. And the mud speaks, and gives her the clues she needs to learn the magic word "Hullabaloo" that she'll need later. 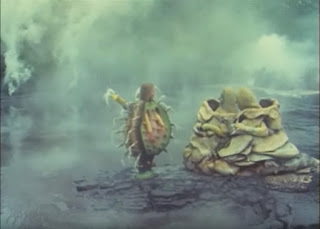 At some point there's an extended sequence of the villainous witch (whose hair is pointy like a witch's hat) working out to a television workout program. The program also features a witch. Apparently there is a channel just for witches?

The girl loses the wand in a tussle with the lackey, but the top of the wand (looks like a plastic Christmas ornament covered haphazardly in glitter) remains behind. The girl poses as a monster to sneak into the witch's cave, and is mistaken for a baby monster and put to work cleaning her exercise equipment.

Yeah, let that one sink in for a minute. The lackey tries to warn the witch that the girl can speak, because she's not really a monster, but the other monsters follow her to the cave in time to face down the witch. The girl climbs up a non-OSHA-approved ladder to a scary opening and shouts the magic word, and all the monsters sing Silent Night. The End, more or less.

I know, you have questions.

Was the witch's lackey a monster as well?

The witch seems okay with Christmas carols in general: why did she hate the monsters' singing? (They sing rather nicely.)

Why Silent Night, of all things? That's just... odd.

I guess the actual thing to know about The Monster's Christmas is that it's incredibly surreal, and not completely boring. You can find it on YouTube.
80's Comedy Lindsay Puppet Special