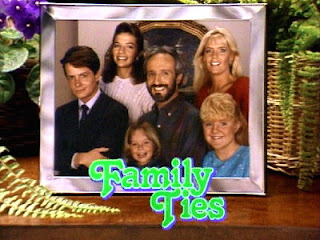 In 1985, I was six years old, Family Ties was my favorite show on television, mostly because of Michael J. Fox's Alex Keaton. Re-watching a few episodes three decades later, I can't really tell why I liked the show all that much, though Fox's deliveries seem to be the highlight.

The show's premise revolved around a couple of liberal ex-hippies raising kids who were more in tune with 80's materialism and conservative politics. As a meditation on the power of the instinct to rebel, even when that means rebelling against the very concept of rebellion, I'd expect them to have enough material to fill two or three hours. The fact this show lasted seven seasons (including the three holiday episodes below) plus a made-for-TV movie doesn't bode well for its watchability.


A Christmas Story (1982): This episode starts on Christmas Eve while the Keatons are getting ready to drive to a ski lodge for the holiday. A blizzard forces them to change those plans, and they wind up sitting in their living room while the parents tell stories about the days each of their kids were born.

This is done via three flashbacks: the first takes place during the parent's time in the Peace Corps during a drought, the second in a hospital where the doctor had been old friends with the father, and third on the day Nixon won re-election. None of these were particularly entertaining, though the last came closest.

The frame story was even cheesier than you'd expect, complete with a forced narrative arc where the family comes together. Of course, it's more fun to watch them bicker, which we do get a little of early on.

All in all, pretty mediocre sitcom fare. There wasn't much I'd call offensive (though it was bizarre they couldn't be bothered to write a single black actor into the scene supposedly taking place in Africa), but it wasn't at all touching and only occasionally humorous.


A Keaton Christmas Carol (1983): Conceptually, this one had a much more interesting premise, retelling A Christmas Carol with Fox's Alex P. Keaton filling in for Scrooge. There were some impressive decisions, particularly around the "Christmas Future" segment, which portrayed the family living as Dickensian urchins in what must have been the early 2000's. It also offered a sort of preview for Fox's role as his older self in Back to the Future Part 2.

All that said, this just wasn't funny. It was an interesting idea, but the vast majority of the jokes fell flat. In addition, the cheap 80's effects look cheesy and uninspired.

I appreciated what they tried to do, but I'd have appreciated it a lot more if they hadn't failed.


Miracle in Columbus (1987): The series's last Christmas episode was four seasons later, and it almost feels like a different series. They've added a few new characters, including a new, younger sibling and had the others grow up a bit.

This episode feels a lot more polished, which has pluses and minuses. The good news is that the jokes are a little better. There are still plenty of bad ones, but there's a handful that are worth a chuckle. The bad news is that everything about this, from the characters' hair to the stories, character interactions, and personalities, felt fake. That's not to say that the series was believable before, but this is a whole other level of artificiality.

The story focuses on Alex taking a job as a mall Santa. For reasons that are never explained, his sisters work as his elves. He meets a kid who just wants her father home for Christmas. Oh, and the reason he can't make it is he has to work as a salesman in Fargo; he's not dead, in prison, terminally ill, serving in the military, or anything. He's just at work.

This depresses Alex, who apparently can't imagine a worse fate on Christmas. Fortunately, Santa Claus shows up and gives him a pep talk in the mall locker room. Saint Nick's identity is verified much faster than you'd probably expect, and - despite some initial skepticism - Alex doesn't find this interaction altogether surprising.

He invites the kid and her mom to his family's house for Christmas, and they accept. Then the girl's father shows up: turns out Santa went to Fargo, bought all of whatever nonspecific item he was selling, and asked him to deliver a gift to Alex.

In case this is somehow subtle, everyone then sees Santa through the window. Again, their level of surprise is on par with what you'd expect if a deer was walking through their front lawn.


This show feels a lot like the 1980's congealed into a gelatinous form. These episodes were sappy and sentimental, while lacking any real tension. There were a handful of decent jokes, even in the first two, but nothing that made watching them worthwhile.
80's Comedy Dramedy Episode Erin Snyder Fantasy