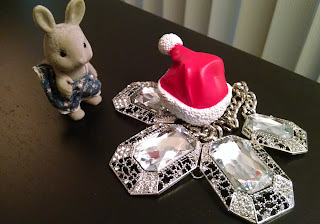 New Release! I received an electronic copy of this book from NetGalley for the purpose of review.

Premise: Another collection of Christmas Mystery stories, this one from the British Library Crime Classics series. Fifteen tales of murder and thievery at the holidays. 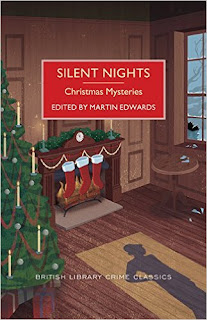 I know, you'd think I would be sick of short mysteries after last year's lengthy read of the Big Book of Christmas Mysteries. However, in this book I discovered a well-balanced selection that was enjoyable overall . I think I may be giving extra credit for being of a manageable length, though.

The Adventure of the Blue Carbuncle (repeat) by Sir Arthur Conan Doyle
A classic, I would never fault anyone for adding this to a Christmas compilation. It remains charming on whatever number re-read this is.

Parlour Tricks by Ralph Plummer
A cute, simple story of a man amusing a group of guests at a Christmas party that is revealed to be something else at the end. Nothing too special, but not bad.

A Happy Solution by Raymund Allen
A story of a young fiancee accused of theft by prospective in-laws, this had enjoyable prose, though the solution of the mystery was somewhat uninteresting to me.

The Flying Stars (repeat) by G.K. Chesterton
I didn't re-read this one this year. I remember it being enjoyable, but overshadowed by better stories last year.

Stuffing by Edgar Wallace
Cute enough story of connected coincidences, although there's enough repeated plot elements from The Adventure of the Blue Carbuncle for me to raise an eyebrow and wonder why this story was included.

The Unknown Murderer by H.C. Bailey
An eerie, well-plotted murder tale involving dark motivations which features a medical doctor detective who ends up solving the case in a rather final manner. I quite enjoyed this one; the winter season just added to the creepy factor.

The Absconding Treasurer by J. Jefferson Farjeon
A sum of money is stolen from a club, but is the treasurer guilty? This story of murder and misdirection follows a solid investigation.

The Necklace of Pearls by Dorothy Sayers
I've had this one recommended a few times, and it's a cute little tale of how a clever thief tries to use the trappings and activities of the holidays.

The Case Is Altered by Margery Allingham
A fine little tangled skein of stolen papers and blackmail at a country house, if a bit muddled at times.

A Problem in White by Nicholas Blake
I liked the way this story built from a set of strangers sitting in a railway compartment to eventually giving each character a name and personality and a place in a tragic murder tied to a train robbery. The mystery is well built, but this is the only story in which the resolution is not actually part of the story, but rather the reader is encouraged to figure out what happened and then check the answer in the back of the book.

The Name on the Window by Edmund Crispin
A locked-room mystery solved at a remove. Not bad.

Beef for Christmas by Leo Bruce
This one I really enjoyed, enough that I might seek out more stories about this character. It's a detective and a narrator pairing, but the narrator is a bit of a pretentious sort, while the detective (Sergeant Beef) is a low-class man who is constantly underestimated. He reminds me delightfully of Columbo. This story concerns a man who claims that someone in his family is threatening him because he's spending their potential inheritance in a profligate manner. The entire story was fun to read and the solution clever.

I quite enjoyed reading through this collection, even though I didn't love every story in it. It's a nice variation of styles and stories.