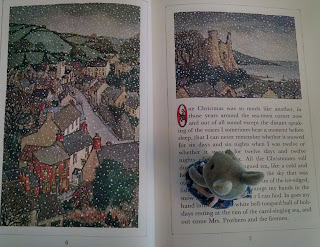 I have seen this book on lists of classic Christmas stories for years now, but it just kept falling to the bottom of the to-read list.

It probably could have stayed there. 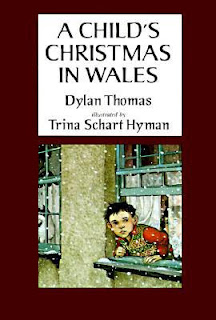 There's nothing wrong with it. It's a short story's worth of words poetically describing the activities and feelings of the holiday at a very particular place and time. It's pretty, especially the version I had with big color illustrations. But there's just not much to it other than nostalgia and pretty phrases. There are some very pretty phrases, admittedly.

There's food, and weather, and an amusing story about a fire scare fought with snowballs, and a brief interlude where young boys sing carols outside a creepy house. Whether the narrator is speaking to a general audience or one person was unclear; it seemed to shift without clear demarcation of any sort.

It comes from a piece originally written for radio, and I think it's probably better as spoken narration. It might go nicely over some loose animation as a short atmospheric piece.

It's neither as beautifully written or as personally specific as Capote's A Christmas Memory, but it has a certain charm all the same. It's fine for what it is, it's just a bit thin taken as a piece alone.