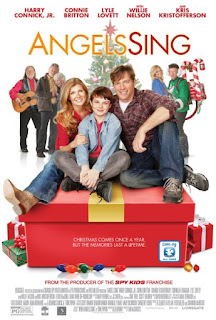 I can't even remember for sure where we caught the trailer for this thing. It was some DVD or another. At any rate, we saw this starred Harry Connick, Jr., Kris Kristofferson, and Willie Nelson, and were morbidly curious what that combination would yield in a low-budget family-friendly Christmas dramedy.

The plot centers around Connick's character, a middle-aged college professor with a vendetta against the holidays. Turns out, when he was a kid, his brother died after saving his life on a lake they were skating on with their new Christmas skates.

The flashback scene depicting this, incidentally, was hilarious.

At any rate, he's a father now, and his son, who's about the same age he was when he lost his brother, loves Christmas. He wants to spend the holiday with his grandparents, presumably because his grandfather used to hunt vampires with Blade, but his dad's too horrified with the whole thing.

Meanwhile, their family needs a new house. After narrowly missing a reindeer, he wrecks his bike and wanders in front of a mansion with a "For Sale" sign posted. He stops to ask the owner, played by Willie Nelson, how much the place costs.

Willie Nelson's character is named "Nick." Oh, and his coat has an image of Santa on it. Oh, and HE'S SANTA FUCKING CLAUS. Or he's a Christmas angel. Or, I don't know, he's high, so he sells Connick's character the mansion for what's described as half its value. Which, oddly enough, is implied to be even less than the four or five million dollars the place is obviously worth, since there's no way Connick's character could have swung that even with a 50% Black Friday discount.

Well, it turns out people travel all over the world to see this neighborhood's holiday light show, a fact Connick is less than thrilled about. The neighbors bring over boxes and boxes of lights, though - to the movie's credit - they're less dickish about the whole thing than most examples of this trope. Likewise, the movie sidesteps the cliche move of portraying the lead as a misanthrope and/or total asshole (looking at you, Kranks).

This will end the list of holiday tropes the filmmakers failed to include.

Because, while getting a ride home with his grandfather, Connick's son is in a car crash. The kid is fine, but Kristofferson's character bites it, just like he did in Blades 1 and 3. This robs us of the movie's most interesting actor and shifts the movie's tone to mope. The kid blames himself and Christmas, just like Connick did.

Angels Sing is one of those movies that would be better if it was worse. It plays like something that a Hallmark executive would pass on after decreeing it's too sappy and dull. It's nowhere near as stupid as 90% of the vaguely spiritual, life-affirming, quasi-Jesus infused holiday movies are, but after sitting through the endless barrage of empty sentimentality and trivial witticisms, you almost want some B-list comedian to run in and pretend to slip on some ice. I'd have taken irritation, disgust, anger: by the end I just wanted to feel something.

If you've noticed a pattern with Connick, Nelson, and Kristofferson, rest assured that pattern continues. This isn't quite a musical, but it skirts extremely close, featuring dozens of minor country musicians (a large number native to Austin) in minor roles and cameos. If you're from Austin and/or have some interest in the local music scene, there's a good chance this movie might be more interesting.

For the rest of us, it's more or less a waste of time.
2013 Drama Erin Snyder Movie