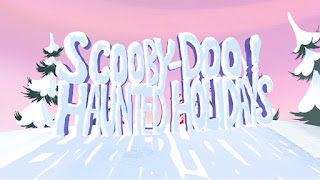 For better and for worse, I found a DVD at the library called Scooby-Doo: 13 Spooky Tales - Holiday Chills and Thrills. It’s interesting, at least, containing a mix of ‘winter’ episodes and actual Christmas content from several of the various Scooby-Doo series. (For example, it included this one.)

Haunted Holidays is a special that was produced direct-to-DVD for this compilation, and I rather liked it. Or at least it wasn't awful.

The premise is more than a bit sketchy: Fred, Daphne and Velma are helping with a Christmas parade for a big toy store, for some reason, when it’s attacked by a crazed evil snowman. The thing has freezing breath and shapeshifting; it’s actually almost scary when it turns into a snow-spider-beast or a snow-alien-mouth-tentacle-thing.


Despite Shaggy and Scooby’s reluctance, as usual the gang tries to get to the bottom of the mystery, which involves a supposed ‘curse of the sinister snowman’ placed on the toy store by the guy who owned the old-fashioned house across the street. He was angry because the toy store had a giant Christmas glockenspiel built into it. Dude, I feel your pain, but the solution is noise pollution ordinances, not evil snowmen.

Of course, the culprit is neither the old man who ‘disappeared’ or the cranky older guy who owns the toy store. It’s the other character you’re introduced to in the first minute of the special, the one who helpfully explained the curse. Duh.

What lifts this above mediocre isn’t the writing, but the animation and the score. The animation is slick and creative, using the classic designs but with modern pacing and movement, not aping the original 70’s movement the way some Scooby-doo incarnations have. The score does a nice job integrating Christmas music into spooky moments, and the balance between action and humor is mostly good, although a little too slapsticky for my personal taste. There is a pretty funny sequence early on featuring an actor fed up with playing Santa. This features the same core cast as Scooby Doo: Mystery Incorporated, and while it’s not as smart or funny as that show (seriously, check that one out) it’s a fine piece of holiday animation.

Scooby and Shaggy defeat the villain by accident in a very silly way, but they are aided by Santa. Not the actor from earlier, the apparently magic Santa. And the gang didn’t rush off to unmask him and find out who he really is!

I don’t know about you, but I smell a sequel.
2012 Comedy Horror Lindsay Mystery Special