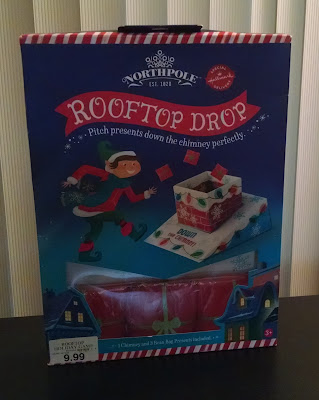 Last January, I found myself in a Toys R Us, which isn't all that unusual for me (that's where you find all the toys, after all). I came across a bin of discounted merchandise, including a handful of Christmas items. One of them was a bizarre looking game called "Rooftop Drop" branded as part of Hallmark's Northpole line. It had a sticker reading $9.99 on it, but I was skeptical - it was too long past the holiday, and things have a tendency of getting marked down in the system without being updated on the packaging. So I took it over to a price-check machine to see how much it was actually going for. 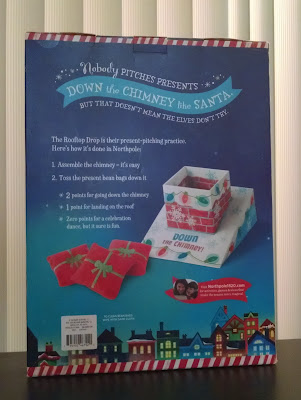 There's some flavor text on the box to make this more appealing. The game rules are spelled out in their entirety on the back of the packaging: there are no rules beyond the scoring guidelines. I'm not saying that means it's legal to bludgeon an opponent - I'm just saying the game offers no rule to the contrary.

This is a simple beanbag toss game: the package contains three beanbags which sort of look like wrapped gifts and a two cardboard cutouts. You also get detailed setup instructions: 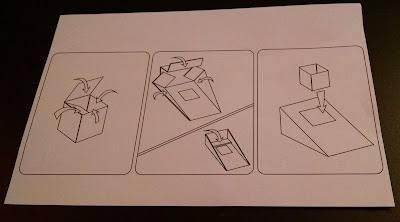 I'm not saying this takes an engineering genus to put together, but some clarification on which end is up on the roof would have been appreciated. Regardless, I managed to throw this together. Here's a picture of it completed. 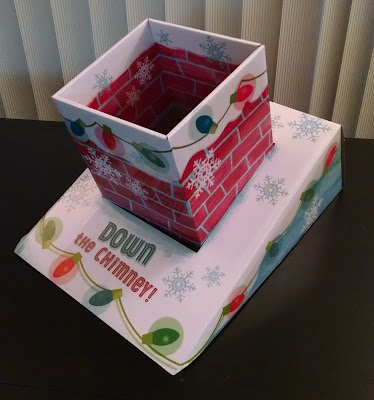 In case anyone's curious, the roof measures about six and a quarter inches tall. The base is twelve deep by nine wide.

Here are those beanbags: 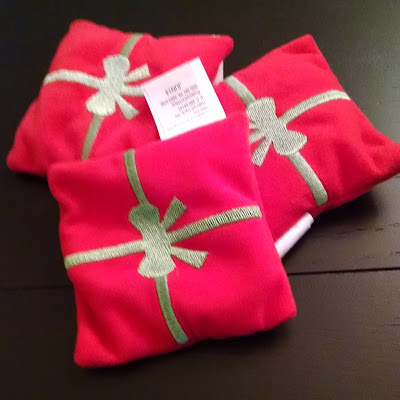 The ribbon decoration is only on the front, and the tags are a little annoying. They're not filled fully, but my guess is that was intentional - it makes the game slightly more challenging and they're unlikely to break the cardboard base.

Lindsay and I played for a while and discovered we both suck at this game. There goes our sense of self-worth.

It might actually be fun as a party game - preferably a party where alcohol is abundant. I can also imaging a kid having fun with this. Unless, of course, that kid was born after the year 1985, in which case they almost certainly have an X-Box or something. Also, it's worth noting that is just a glorified cardboard box with three beanbags. At three cents, I'm happy enough with that, but I'd feel ripped off if I paid anywhere near suggested retail.

But - again - I got this for 99.7% off, which almost set an all-time record for the highest discount I've received in more than a decade of toy collecting. In fact, it would have, had this been the only thing I picked up from that Toys R Us....