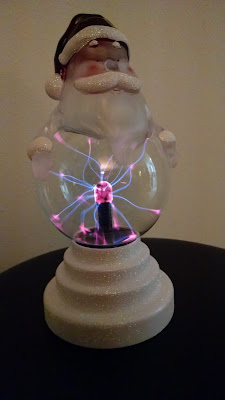 He had a broad face and a little round belly,
That shook when he laughed, like a bowlful of jelly.

Before you ask, the answer is yes - that is a plasma ball built into Santa's stomach. We found this in early November at Fred Meyer on sale for 50% of its suggested retail price. If I even have to explain why we bought it, you're reading the wrong blog. 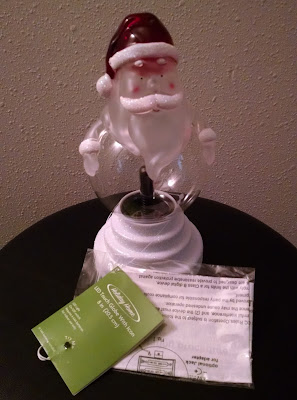 The tag on this calls it an "LED Touch Globe With Icon". The "Icon" part is to keep things ambiguous, since they also had ones with a snowman motif. Between the two, I can't imagine anyone picking up the snowman.
Other than a tag connected to a "try me" button and a bagged set of warnings and instructions, there was no packaging. The tag was branded, "Holiday Home," which is about as generic as you can get. The back says it was distributed by "Inter-American Products," which sounds nothing like a soulless multi-national conglomerate run by a shadowy cabal of supervillains bent on world domination.
Before enjoying our purchase, we made sure to read the "IMPORTANT SAFE INSTRUCTIONS" sheet. I suggest you do the same before continuing. 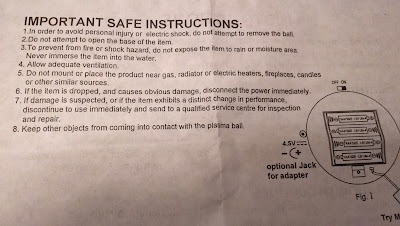 Notably absent: Do not taunt Happy Fun Ball.
I should also mention that this has a port for a 4.5 volt AC adapter if you have one lying around. I'm sort of tempted, though part of me suspects it would lead to a story the fire chief would be telling for decades to come. 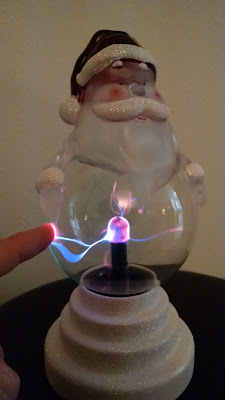 In terms of appearance, this is essentially the unholy love child of a cheap plasma globe and an even cheaper holiday decoration. The base is coated in a layer of glitter, as are Santa's mustache, hat trim, and cuffs. Oh, and now my entire goddamn apartment.
Turned on, it functions the same as any other plasma ball. Left alone, a dozen or so electric tendrils shoot out randomly, but they converge if you touch the glass.
Mostly, I love the idea that someone, somewhere, decided this was something that needed to exist.
Like I said, we found this on an end cap at Fred Meyers. Retail price would have been twenty bucks, but we picked it up for half that. Ten dollars for a plasma globe - even a sub par one - seems like a decent enough deal. The cheesy Christmas elements really sold it, though. Hell, there's a part of me who wishes we'd dropped another ten and gotten the Snowman to go with it. Or, barring that, maybe two or three more Santas. 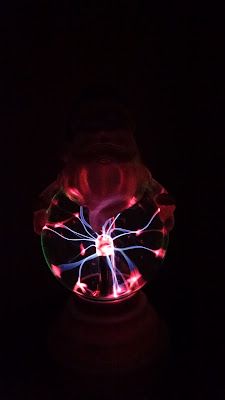