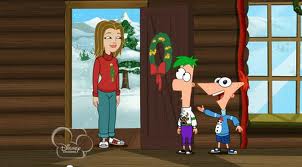 Phineas and Ferb's second Christmas special was quite a bit smaller and less ambitious than their first. I also liked it quite a bit more.

This is essentially a half-episode, which is a format the series is used to: most Phineas and Ferb episodes are broken into two unconnected 11 minute shorts. This differs from the norm in that it's a standalone: there's no "second short" following it. My guess is it was produced to be aired along with the much longer special from the prior year (with commercials, they should fill out an hour together).

The plot to this episode is intentionally thin: the boys are putting on an old fashioned Christmas TV special in the middle of summer. While this ostensibly uses the show's normal formula, it doesn't really commit to it. The sequences with Perry and Doofenshmirtz are far shorter, and Candace's attempt to bust Phineas and Ferb is tacked on. I don't think this is a problem: in fact, it demonstrates the writers' commitment to a different formula: that of the TV specials they're parodying.

A large portion of the run time is devoted to songs, which I'm thrilled to say are much better than most of the ones filling the 'Vacation' special. Buford and Baljeet's duet was particularly clever.

The pace moved along at a good clip, the jokes were funny, and the whole thing was simultaneously sweet and sappy (like I said, they committed to the format). It was short, but it was a lot of fun. I'd recommend this to anyone who enjoys Phineas and Ferb, which is readily available on Netflix.
2011 Christmas in July Comedy Erin Snyder Highly Recommended Musical Science Fiction Special Variety