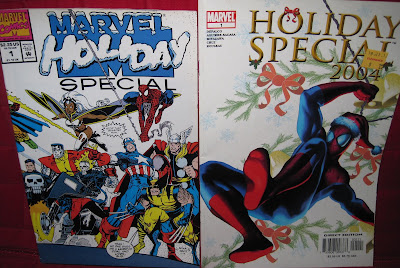 There are eight short pieces in this double-size special, plus a selection of art pieces. Some I think might have been reprints, but it’s unclear. They’re a mixed bag, overall. The X-men story is rushed and strange, the Fantastic Four one is kinda nice and kinda heavy-handed. There’s a short Punisher piece with a nice melancholy tone, and a corny-fun Thor piece which is quite explicit about the Asgardians’ roles as gods, and Odin’s connection to Santa. After that is a sweet little story about Captain America meeting Bucky’s elderly sister, and a zany tale about a blind kid who mistakes Ghost Rider for Santa. There’s some badly written Marvel-themed lyrics to be sung to the tunes of various carols, and a farce about Captain Ultra (yeah, I don’t know who he is either.) The issue closes out with a piece about Spiderman visiting a children’s hospital over the holidays.

There’s redeeming qualities to these stories, but for the most part they’re dated and odd enough that most people shouldn’t spend the time to track this down.

This special issue contains three stories. The longest one, and the most fun, is a spin on Christmas Carol, featuring the Marvel U’s resident curmudgeon, J. Jonah Jameson, as Scrooge, and various heroes appearing as the spirits. It’s a really cute story. There’s also an X-Men story about Scott and Emma comforting a mutant student who doesn’t have anywhere to go for holiday break, and a story about Franklin Richards asking each of the Fantastic Four what the holidays mean to them. That one edges into schmaltz here and there, but it’s mostly sweet.

This is a pretty fun issue, and I recommend it if you get a chance.
Book Lindsay