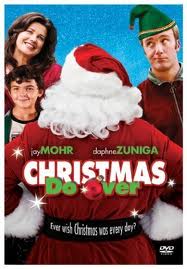 But I'm pretty sure the only thing important here is Groundhog Day.

The premise of Christmas Do-Over is that the main character is visiting his ex-wife's family on Christmas to see her and his son. Due to a boulder falling on the only road out of their town (which isn't nearly small enough to plausibly have only one road out), he's forced to spend the entire day, instead of just a few minutes. He meets his ex's new boyfriend, who gives her a car for Christmas, goes to a Christmas fair where his ex-father-in-law is competing, has Christmas dinner, goes caroling with the family, and watches his ex agree to marry her new boyfriend, who proposes that evening. Through all of this, he's a total jackass, but that doesn't stop his son from wishing it were Christmas every day, which magically creates a time loop that only the main character is stuck in.

In addition to using the same premise, the movie follows the same structure as Groundhog Day: after going somewhat crazy, the lead character starts working to fine tune the day by mastering specific skills and the laws of causality. Eventually, he gets the day right, realizes he needs to keep Christmas in his heart all year or something, and breaks free of the loop.

Overall, the movie is pretty awful, though it had more good moments than I'd expected. The first thirty minutes or so are just abysmal: there's nothing likable about the lead, and the fact they made his rival (his ex's new boyfriend/fiance) even more unlikable to compensate was just pitiful.

The movie started to imply it might dig its way out of its hole when the main character realized the boyfriend was actually a good person. For a while, it seemed like he'd realize he'd have to move on with his life... but that didn't play out. Despite the fact the new guy was nice, far better off financially, and more committed to the lead's ex and son, part of getting the day right was winning her back. I'm not entirely sure how this constitutes a happy ending for most of those concerned.

Like I said before, there were some good parts. A scene where a fight breaks out at the fair involving the main characters brawling with people dressed as Santa, Joseph, Mary, and Jesus was the high point. In addition, there were a few sequences where some drama crept through as the lead recognized he was responsible for the failings in his life.

But a few bright spots don't come close to redeeming this thing. As a whole, the movie is long, boring, and sparse on humor. In short, definitely not recommended.
00's Comedy Erin Snyder Fantasy Movie Science Fiction