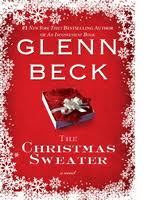 I sat down with Glenn Beck's famous Christmas story expecting to hate it. I started with low expectations - possibly some of the lowest I've ever had for anything, ever. But then something unexpected happened: something that can only be called a Christmas miracle:

I hated it even more than I thought I would.

The story of "The Christmas Sweater" is loosely based on Beck's childhood. The introduction seems like it's intended to mislead you into thinking it's a true story, but it's almost immediately obvious that's not the case. To be fair, Beck includes a section at the end offering a quick overview of what's true (the name of his parents' bakery) and what's BS (pretty much everything else).

There's a lot to hate about this. The humorous bits aren't actually funny, the characters don't come close to feeling real, the last 99% of the story drags, and the writing's about as bland as fiction can get. But, more than anything else, I was shocked by how blatantly manipulative the story was. The morals and metaphors are painfully obvious - emphasis on painfully.

To be honest, I'm not sure it's really possible to follow the story in and of itself. The points Beck's trying to make and the ways he's trying to make them are so ridiculously obvious, it was almost like listening to a really, really boring audio commentary. You can't focus on what's going on, because the voice-over is too omnipresent.

To the extent that there's a plot, it's this: Eddie (the main character) loses his mother on Christmas in a car accident partially caused by him being a dick to her because she made him a sweater instead of buying him a bike she couldn't afford. His father died a few years earlier, so he goes to live with his grandparents. He's a dick to them, too, leading to what I think was supposed to be drama (hard to tell). At some point, he's walking home and he meets Jesus, who for some reason introduces himself as "Russell". Despite the fact he's clearly Jesus, Eddie keeps calling him Russell and being a dick to his grandparents. This drags on, as Eddie is given numerous opportunities to stop being a dick, but is unable to recognize that his problems stem from an unwillingness to take responsibility for his problems and accept Russell as his personal savior.

In the end, Eddie runs away on Christmas Eve and winds up in a cornfield with a storm bearing down on him. Because Glenn Beck apparently thought the previous two hundred pages were too subtle, the cornfield starts talking to him (it's the devil), enticing him to stay. Fortunately, Russell shows up, convinces Eddie to pass through the storm, and the past year is magically undone.

Eddie wakes up in bed, and his mother's still alive. Because apparently Glenn Beck thinks that's still a valid way to end a book.

You know something? My opinion of Beck was low going into this, but even I'd have thought he'd know better than to think that would represent an emotional payoff.

The book is blatantly religious without offering any sense of mystery. It's manipulative without actually hitting a single emotional note. In short, it's utterly and completely useless. Just like Glenn Beck himself.
Book Crime Against Humanity Erin Snyder