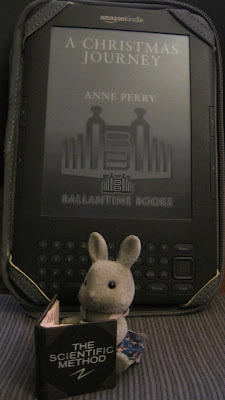 Premise: A bunch of rich snobs drive a young lady to suicide at a Christmas party and then make another lady travel to Scotland because she feels guilty.

What in the hell did I just read? It wasn’t a romance. It wasn’t suspense. It barely had a plot. I guess it’s tepid historical fiction? It was really odd.

I liked the beginning, I thought maybe it was going somewhere. I liked that the main character’s name was Vespasia, that’s dramatic even just to read. However, as the insignificant details mounted, and discoveries came to light about a character who really got very little page time prior to her death, I just couldn’t bring myself to care.

There were some almost okay parts where Vespasia reflects on her friendship with Isobel and how it brought them both to the back end of Scotland in the dead of winter (to carry the news of the deceased young lady to her mother). But sadly, most of it was just navel-gazing. Boring navel-gazing.

Vespasia’s obsession with one obnoxious male character who could seemingly do no wrong was especially creepy. The prose wavers between overwrought and too vague. It’s just a story about two women travelling and then coming back, with nothing to show for it but a lot of significant looks and talk, and then the end was really pretentious.
Book Lindsay Sucks