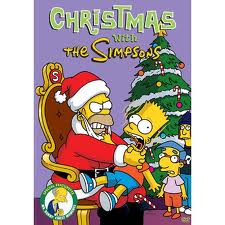 A few years ago, I looked at Simpsons Roasting on an Open Fire, the series' pilot/Christmas special. It held up incredibly well. But while that was the first, the series has certainly racked up some additional Christmas episodes in its twenty-four seasons on the air.

The two I'm looking at today were included on a DVD called "The Simpsons Christmas," along with the pilot and two others which really shouldn't count as Christmas episodes at all. But the DVD was released in 2003, back when they only had a handful of actual holiday episodes to choose from.

First up, we've got "Miracle on Evergreen Terrace," from season nine. I remember those years: we used to debate whether it was time for the show to wrap up. It seems almost quaint now. At any rate, Bart accidentally destroys the family's presents and Christmas tree, hides the evidence, and blames their disappearance on a burglar. While the plot meanders from there, the jokes are solid and the character work - particularly around Bart, who's especially troubled by the town's sympathy - is clearly a priority.

"Grift of the Magi" came out two years later. The plot is even more of a tangled mess. Springfield Elementary has closed due to a lack of funds and gets reopened by a private company, which forgoes actual education and instead uses the kids as market research to design a new toy. There's really no connection to Christmas until the last act, when Bart and Lisa discover the toy is programmed to destroy other toys. Naturally, they decide they need to steal every one of the toys on Christmas Eve then destroy them. The episode doesn't really resolve the plot: it just kind of ends with some jokes about Gary Coleman, who randomly guest stars.

I enjoyed "Grift of the Magi" well enough, but it was not done any favors by my having just seen the far superior episode before it. And it's probably best I didn't watch "Simpsons Roasting on an Open Fire" right before them both: I doubt they'd have fared well in comparison.

Both episodes lacked direction (the second more than the first), but both were still funny (the first more than the second). I enjoyed watching them again, but they're ultimately forgettable.
90's Comedy Episode Erin Snyder