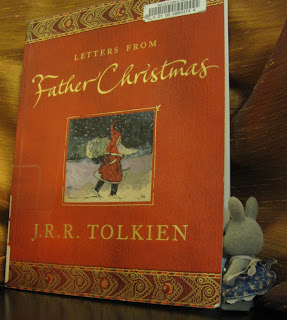 Premise: This whimsical volume reproduces a series of letters that Tolkien’s children received from “Father Christmas” between 1920 and 1943.

This was very interesting, as a student of early fantasy writing and as someone with interest in different ideas of Santa. It is not, however, exciting to read.

These letters were clearly never intended to be published. They were purely a gift from a father to his children, and while they are often elaborate and entertaining, there is very little in the way of plot here. Plus we are only getting half the story, as Father Christmas often thanks the children for their letters or answers their questions.

The time and skill involved in creating these mementos is obvious. Most letters came with an enclosed drawing, all reprinted in lovely color here. As more characters were introduced over the years, they developed their own writing styles. Happily, the text is transcribed for ease of reading, although I’m glad the book preserves examples of Father Christmas’ shaky scrawl, the Polar Bear’s use of a broad marker to make marks like runes, and the scribe elf Ilbereth’s small script.

Most of the letters tell of some happening at the North Pole that year, whether the bears were mischievous and delayed packing the sleigh, or local gnomes help flush attacking goblins out of a tunnel. Bear in mind, though, that the intended audience here is quite young, so there’s never any real sense of tension or danger, and anyway all the stories are being told after the fact.

The first few are more unfocused, before the style and the cast of characters were really formed, and the last few are a bit melancholy, as war ripped through Europe. Tolkien’s own Anglo-centrism shows through every so often, most notably when Father Christmas exclaims at how busy he is because in addition to his normal routes, he is “getting stuff down to the South Pole for those children who expect to be looked after though they have gone to live in New Zealand or Australia or South Africa or China.”

It’s more biographical than anything else, revealing little hints to the relationships between the children, or the children and their dad. It’s a very pretty book to flip through, and an interesting piece representing a minor work of a creative person.

I enjoyed reading it, although it wouldn’t be for everyone.