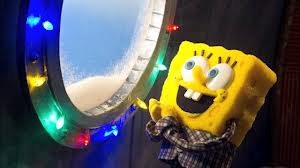 We got a tip (thanks, Mom!) that this new special was going to be airing on network TV, so we sat down to check it out.

Now, I’m only passing familiar with Spongebob, although that’s more than Erin is. My takeaway from this is mostly that I respect the attempt, but don’t think it fully came together. Maybe it’s funnier if you know the show better.

This episode was entirely filmed in stop-motion, and the effort is appreciated, although it’s not an unusual choice these days when one wants to evoke the feeling of Christmas specials past. (See Abed’s Uncontrollable Christmas for a better example.) However, I’m not sure all the character designs really make sense in three dimensions, particularly when they tried to replicate some visual tropes of the usual animation. The sets were neat, though, and while I didn’t ever think the voices completely matched the fuzzy little dolls, the aesthetic of the thing overall was kind of cool.

The story follows the villain Plankton trying to get on Santa’s good list by feeding everyone in town fruitcake poisoned with jerktonium, thereby altering the grading curve, I guess. It’s a fun idea, and SpongeBob driving around in a fruitcake dispenser was amusing. The visual choices for the jerk-ified citizens were rather uninspired, though.

There were some funny moments and some cute songs, although nothing really blew us away. I’ll give this new special a decent middle-of-the-road pass and say it was fine. Only seek it out if you like SpongeBob already. I did really like the Holiday-ized and stop-motion version of the theme song, though.
2012 Comedy Fantasy Lindsay Special Stop Motion