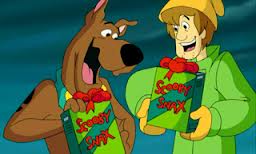 This is one of those specials that comes a hair's breath from being "so bad it's good," but can't quite overcome the aspects that are just bad.  The series it's from is about a decade old, which puts it well past the era when Scooby-Doo seemed ahead of its time.

The plot centers around a mystical living snowman which can remove its head and is obsessed with destroying chimneys. It's about twelve feet tall and has supernatural powers, meaning the "guy-in-suit" won't work this time. Well, unless it's a guy in a robot suit using stupidly unrealistic science to pull off the effect.

Spoiler alert: it's a guy in a robot suit using stupidly unrealistic science to pull off the effect.

Here. Have more back story. There's a local legend about a headless snowman who's animated by the ghost of a robber who died a century ago after hiding some gold in the town. There are a couple of townsfolk acting as red-herrings: a sheriff who always seems to be around after a crime and the owner of the inn, who's making quite a lot sheltering the victims of the snowman. But it's pretty obvious the culprit can only be the character who's utterly superfluous and who's presence doesn't even make sense.

I refer, of course, to the college professor who wrote a book about the snowman and the robber.

Now, you might imagine that the guy who wrote the book about the myth and who's pretending to be said myth actually invented the story entirely... but you'd be wrong. The robber was real, and the gold he hid is, as well. The professor is directly descended from the gold's original owner, and he wants it back.

The meddling kids uncover his plan, capture him, then find the gold for good measure. For some reason, the town then forgives him and presumably decides not to press charges... despite the fact he's caused hundreds of thousands of dollars in damages and endangered the lives of their kids. But, hey! It's Christmas! As icing on the cake, they even agree the gold is his property, despite the fact it turned out that it was literally built into their homes.

The special ends with the professor discovering the meaning of Christmas specials and deciding to share the gold with the town and the Scooby gang. He hands them a gold brick, which has to be worth several hundred thousand dollars. They seem happy, but not nearly happy enough, if you ask me.

Well, this wasn't really boring, which is pretty high praise these days. But it was stupid, and not quite that fun way: more like they should have tried harder.
00's Comedy Episode Erin Snyder Mystery