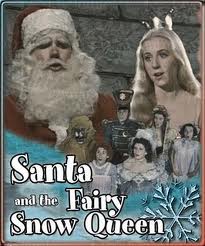 What the HELL was that?

Okay, so Lindsay and I recently ordered a collection on Amazon titled Holiday Family Classics, containing more Christmas specials and movies than you can shake the severed arm of a snowman at. One of the first was titled,"Santa and the Fairy Snow Queen", and I was curious. I mean, I like Santa Claus. I like fairies. Putting them together should be a no-brainer.

I don't know where to start. This live-action special is introduced by a brownie - not an elf, interestingly enough - named "Snoopy" (no relation - had this been narrated by a dog, it would have been far, far better). Apparently, Snoopy's no longer tasked with making toys, but is rather the brownie charged with sneaking into children's rooms late at night to talk to their toys and get information on whether kids have treated them well.

I feel it's significant that Snoopy is one of the most annoying characters to ever grace the screen. She has a high-pitched laugh that sounds like the unholy love-chid of a mouse and a horse. Also, she never stops smiling. And not in a natural way either: she has this impossibly huge grin that would make the Joker jealous.

After she explains her job in a manner that no doubt inflicted dozens of children with nightmares, she offers to tell the story of how Santa's toys first came to life. I know from experience that no amount of screaming at the screen can prevent her from doing so.

At this point, the special transitions from frame story to Toyland, the home of Santa Claus. And when I say "transitions", I mean that she crosses to the other side of the stage, where they've constructed one of the crappiest sets ever to grace a Christmas special.

The entirety of the set consists of some giant-sized presents in the background, some actors dressed as toys everywhere, and a pair of giant boots representing Santa Claus. Every now and then they cut to an actor playing the part. And how is this master thespian? Well, picture the worst mall Santa you've ever seen in your life. Now, imagine his younger brother stole his costume and fake beard. That's what's in this special.

Here's the plot, in all its grandeur: Santa's invited the Fairy Snow Queen over for sugar cookies, but when she gets there, he's so exhausted from busting his ass making toys, he's asleep (at least that's Snoopy's explanation: if you ask me, he looks smashed). Since the Fairy Snow Queen likes playing jokes, she brings all of Santa's toys to life. Santa wakes up and is amused for no good reason. The toys dance, sing, and march around like idiots. Santa asks the Fairy Snow Queen to turn the toys back before they break or fall in love, but she can't, since her magic can't be used without the consent of the target and - for some reason - the toys are reluctant to give up their newfound life. Santa guilts them into a compromise: they agree to be toys, provided they can come to life for an hour a day. The Fairy Snow Queen waves her dollar store-wand, and the special mercifully comes to a close.

If this had been, say, a five minute animated short, I can imagine that story being kind of sweet. Unfortunately, it was a half-hour. How did they fill that half hour? I'm glad I asked. Mostly with dancing. Really, really, bad dancing. To music lifted from The Nutcracker (plus a random song from Sleeping Beauty).

It's almost like someone saw The Nutcracker, decided it was too complex for kids, and transformed it into this monstrosity.

On the historical side, there are some interesting elements, if you're a geek after my heart. First up, Santa's helpers are brownies, not elves, and the Fairy Snow Queen is one of his friends. This harkens back to Baum's "The Life and Adventures of Santa Claus," which is more or less the ancestor of every Christmas special you've ever seen. The use of Toyland was almost certainly ripped off of Babes in Toyland, which isn't particularly interesting by itself, but part of Snoopy's job - reclaiming discarded or broken toys for eventual reuse - is reminiscent of King Moonracer and the Island of Misfit Toys in Rudolph. I'd be interested to find out where this idea originates from a like source (I find it hard to believe it originated here - apparently, this never exactly had a large audience).

A few minutes online confirmed this special's pedigree: this was local entertainment, not intended for a national audience. And it certainly shows. Unless you're us, there's no reason for anyone to watch this. Ever.
50's Dance Erin Snyder Fantasy Special Sucks