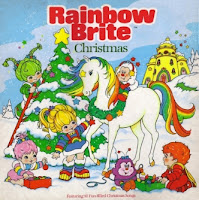 Remember Rainbow Brite? Sure you do, it was a short-lived but much remembered 80's cartoon for girls. But did you know that Rainbow Brite released two records of music? And that one of them is a Christmas album? That you might not have known.

In the 80s  there wasn't a lot of concern for voice actor fidelity in children's media, so only a few of the voices on the disc are actually the voice actors from the series. That doesn't prevent this from being an exercise in blended nostalgia and a sort of bemused horror.

First off, let me tell you how surreal I find the song choices. Between Silent Night, Joy to the World, The First Noel, God Rest Ye Merry Gentlemen (of which they do more verses than many other recordings I have) and Hark the Herald Angels Sing, over a third of the songs are religious carols. To me, that seems like a really high percentage for a kids album based on a fictional character. Especially since said fictional characters are a bunch of super-powered children who live in a sort of magical pocket dimension in the sky, who are ultimately responsible for light, spring and color, and thus continued life on earth. I find the image of the Color Kids singing about Jesus completely and utterly bizarre. Don't forget they have chipper little voices, and are backed up by synthesizer.

Another important point: A Gift of Love is a song that I had only ever heard on Disney: The Twelve Days of Christmas. It apparently originates here, and the lyrics make much more sense for Rainbow Brite than for Mickey and Co.

Christmas in the Pits really grew on me on re-listening, because it's just so weird. It's an upbeat sort of ditty about how Murky hates Christmas. Except of course Lurky only hates it sometimes, so it becomes a little dialogue about how much Lurky likes Christmas, but he'll hate it for Murky's sake. http://www.rainbowbrite.net/sounds/RainbowBrite-XmasInThePits.mp3

Two of the songs that aren't religious (Twelve Days of Christmas, Deck the Halls) have all their lyrics revised for the setting, and are amusing, if not actually good.

Best Songs: Christmas in the Pits, A Gift of Love

I'll readily admit, I'm softer on all this cheesy kids music than Erin would be, because little-kid Christmas is about the surest way to my nostalgia button. And while I never had this album as a child, there was a time when the other Rainbow Brite music cassette: Paint a Rainbow in Your Heart, was on continuous play in my house.

This album has been out of print basically since it came out, but you can find the tracks for download on rainbowbrite.net
80's Lindsay Music Novelty Album