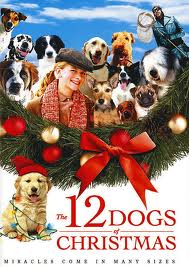 This movie makes me think of Equilibrium. No, stay with me here - I'm going somewhere with this.

In Equilibrium, the government is more or less run by Nazis who have outlawed emotion. As such, the point of the movie is that emotions are good and Nazis are bad.

Surprisingly, I've never seen another situation arise where this moral has been especially enlightening.

The 12 Dogs of Christmas takes place during the depression in a town where dogs have been outlawed. The moral of the story is that dogs can be good and sadistic dogcatchers who use captured animals in dogfights are bad.

Once again, while I don't disagree with this assertion, neither do I feel particularly enlightened.

This is - unfortunately - a full length movie. I'm not entirely certain whether this was made-for-TV or released direct-to-video. Usually, I just get trivial details like that from Wikipedia, but this movie doesn't actually have a Wikipedia page. Having just watched the movie, this doesn't surprise me.

The movie is more or less the dictionary definition of safe, family entertainment (or it would be if it was actually entertaining). There's no real sense of danger, even when characters are being chased by the absurdly evil dogcatchers. Since I've forgotten the two dogcatchers' names (and don't care enough to check), I'm going to refer to them as Murky and Lurky going forward.

Murky and Lurky are quite possibly the least threatening villains I've ever seen in a live action movie. That they manage to capture anyone or anything is baffling - it should be noted that their few victories are almost always off-camera. When they're on camera, they're regularly undone by a child kicking them in the shin then running off. Criminal geniuses, they're not.

Production values vary. The actors are decent (in fairness, it's occasionally entertaining seeing them enjoy the campy dialogue), and the movie looks fine. However, there are clearly issues with the setting - a quick glance on IMDB revealed what I already suspected: the movie was filmed in May, and the snow was shipped in from a ski resort. As a result, the cars in the movie are magical. When in motion, it's always summer through the windows; when they stop, there's snow on the ground.

This movie isn't aggressively bad, at least no more so than any other disgustingly cheerful celebration of the human spirit out there. However, it's as boring as you'd expect.

I can't imagine there's anyone out there seriously considering watching this, but just in case: skip it.
00's Comedy Erin Snyder Movie