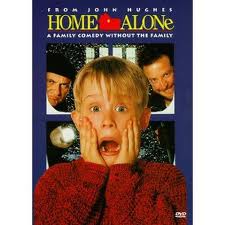 To my surprise, this movie is not actually terrible, just sort of boring. It's decently shot, and it has good music, but the characters are uninteresting and the plot is thin and slow.

From the beginning, the whole set-up is heavy-handed; the level of anger and actual evilness from the family members is so over the top that it's hard to get behind the later desire for reconciliation. They are all jerks, and the kid is kind of better off without them.

There are some truly random tone shifts; it feels as though most plot elements were added piecemeal, and moved around somewhat at random. It doesn't help that the continuous schtick prevents the characters from gaining any real emotional momentum. Macaulay Culkin mugs through the whole thing, seeming determined to prove he can't act.

And then of course, there's the house of death. You remember the house of death, it's probbaly the only thing most people remember about this movie at all. It's the part where the kid sets up horrible maiming booby traps for the burglars, who then bounce from pain to pain like cartoon characters. For the only part anyone remembers, it's short: it really only makes up about 15 minutes or less of the film. I hate this kind of humor, so I'm really not the best to judge, but I found it basically as boring as the rest of the film, plus a lot of cringing. I wince when characters fall down stairs. It HURTS to fall down stairs. I probably thought this was funny when I was a kid, but most kids have no visceral memory for bodily injury.

For all that, I still say it isn't awful. There are a few scenes that are kinda cute, although most turn trite before the end. Is it bad? Yes. Dull and seemingly endless? Oh, yes. So, worth your time and eyeballs? Nah.