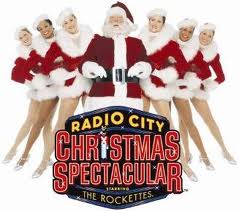 OMG! THAT WAS AWESOME!

The Radio City Christmas Spectacular may be the most purely Christmas thing I've seen ever. It was entirely made up of shiny shiny sparkly things, spectacle, and ridiculousness.

I loved it, in case you didn't notice.

From the first number, in which the lovely Rockettes danced impressively in some disturbingly sexy reindeer costumes... and then their antlers LIT UP, I knew I was going to like this.

There were low points, of course; the 3d movie of Santa's sleigh was pretty corny, the all-teddy bear Nutcracker had moments, but went on too long, and there was one awkwardly heartfelt song that was just boring given what had come before it. However, since nearly every odd or out-of place moment was clearly a vamp so that the Rockettes could change their costume, I can't judge too harshly.

Besides which, the Rockettes got to star in a 'video game' presented in '3DLive'! That was hilarious.

Given my fondness for city Christmas, it should be no surprise that I was transported by the Christmas in NY number. PLUS THERE WERE ICE SKATERS. THEY CAME UP THROUGH THE FLOOR!

I was also surprised by how much I liked the Live Nativity. It might have been the way one camel kept eying the scrim like it was tasty, but the sheer spectacle of it kept me fascinated.

I love ridiculous spectacle, after all. Throw in some impressive high-kicking, sparkly costumes, live animals, a double-decker bus and pyrotechnics and I'd say you've got a recipe for a damn good time.
Lindsay live event