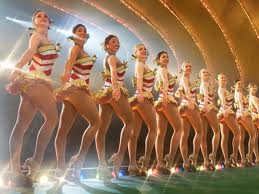 Right now, Lindsay's sitting beside me on the train back to Queens, typing her love letter to the Radio City Christmas Spectacular. I can appreciate that reaction. But mine was perhaps more... complicated.

The Radio City Christmas Spectacular was, I think, the best and the worst thing I've ever seen.

It was madness. It may be the last surviving vestige of vaudeville; this is a show which has lasted since the 1930's. But make no mistake: it paid a horrible price for survival.

It sold its soul to Christmas. The show is a blur of dancers in skimpy outfits being pimped by a fat man in red while multi-colored lights and projections of the New York City skyline whirl by. And then the 3D glasses come out.

A mother and her daughter learn the true meaning of Christmas by hunting digital Christmas fairies and blasting them with holiday cheer. The Rockettes dress as reindeer, Christmas presents, and - worst of all - tourists in a series of dances masquerading as family entertainment. The North Pole is a clockwork monstrosity of so many projections and set pieces, the mind loses the ability to tell what's real. And then the baby Jesus makes his appearance, surrounded by elaborate, gaudy sets and live animals.

It's spectacular and horrific at the same time. It's an unparalleled spectacle of light and color and costume. And it's the deepest pit of Christmas Hell, where everything holy is mocked, and everyone uses Chase Bank.

The product placement alone is incredible.

I still don't know whether I liked it. But I do think that nothing I've seen before so perfectly encapsulates the mandate of this blog.

Seeing this was seeing Christmas. What else can be said?
Erin Snyder live event