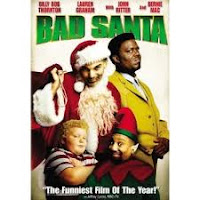 I've never seen this movie before this year, despite the parallels in tone with this blog. Going in, I was aware the movie was based on the theory that having Billy Bob Thornton drinking and swearing while wearing a Santa suit would somehow equal comedy gold. That they somehow managed to prove this theory is kind of amazing.

This thing is very well made and does a good job knowing precisely how far it can go without actually crossing the wrong line. The movie wants to create the illusion it has no limits or sense of decency, but that's not the case. The lead character never really does anyone any actual harm (well, at least not where we have to see the consequences), which prevents the audience from having to confront any dark truths, save the requisite criticism of consumerism.

I'm no fan of gross-out humor (in fact, it repulses me), but nothing in here bothered me. I remember seeing the trailers and thinking this would be a dark comedy, but it isn't; not really. Ostensibly, the subjects of the jokes get vile at points, but there's a lighthearted - dare I say "whimsical" - charm to the whole thing that made it hard to find anything offensive.

I think that's the most surprising thing about this movie - despite the vile jokes, violence, and swearing, it's light popcorn entertainment, far more interested in making you laugh than cringe. It's a solid flick for those who love and/or hate the holiday season: strongly recommended if - like me - you missed this when it came out.
00's Comedy Dark Comedy Erin Snyder Highly Recommended Movie