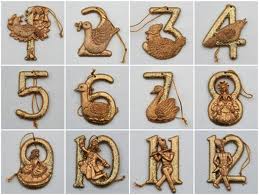 I've been listening to a lot of Christmas music recently, and reflecting on the difficulty of The Twelve Days of Christmas. It's a long song, and while it can be fun to sing counting songs like this one, it can be dreadfully boring to listen to them. Hence why most successful recorded versions of 12 Days include jokes, asides, or other little tricks to keep your interest. I'm going to provide a bunch of decent versions of the song below, let's see if I can get to Twelve.

1: The Muppets and John Denver

Here you can see some classic tricks: different voices on each verse, some humorous asides, including Fozzie forgetting his lyrics. They actually redid this version almost moment for moment with Jimmy Fallon a few years ago, but the internet does not seem to want to provide me with the video of that.

This a cappella group does a really fun medley mashing up 12 Days with a ton of other holiday and non-holiday tunes. The humor exploits the listener's knowledge of the song. It sort of has to be seen to be believed.

You have to be patient for the funny in this one, but eventually it starts to come apart at the seams for a bit...

4: Bela Fleck and the Flecktones

This is both impressive and fun to listen to; the group changes lead instrument, style and tempo for every verse.

No video, but you can listen to a clip of the song at the link. I talked about this song on last year's review of the CD. This is really inventive for a wordless version: they use different instruments for each verse, evocative of the different gifts.

Another version based in humorous sound effects.

7: The Addams Family: The Musical
This one, I can only tell you about, because apparently it's so new that no one has added it to the internet yet, and I'm not about to be the first. On my shiny new CD: Broadway: Carols for a Cure Vol 13, the cast of The Addams Family Musical does a fantastically funny Twelve (13) Days of Christmas. But you'll just have to take my word for it. It does involve bedbugs biting.

As in that recording, a popular way to make the song unique is to change up the lyrics, here's a few more versions:

...but just on principle, I'm not as big a fan of those as of the versions in which the traditional lyrics are kept, but the song is still interesting to listen to. Besides, even new lyrics get old by verse 12 if that's all you're doing.

Sample at the link. This version has a lot of that same charm that I love in the Muppet version at the top of the page: characters lending their particular commentary to the traditional lyrics.

This is more a comedy skit to music than a song, but it is highly amusing.

Okay, I guess I only got to eleven versions, or 132 Days of Christmas in total. I think that's plenty, though, don't you?

I mean, let's be honest: