Book Review: The Nutcracker and the Mouse King 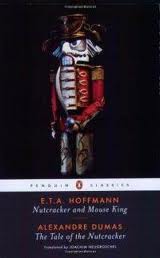 The Nutcracker and the Mouse King
E. T. A. Hoffman, 1816
Translation by Joachim Neugroschel

Crossposted at The Blue Fairy's Bookshelf

So, after watching several different versions of the Nutcracker Ballet for Mainlining Christmas, I wanted to go back and read the original story. That proved to be harder than it sounds, but I finally got access to a Penguin classics edition at the library.

(This volume also included the slightly sanitized retelling of the tale by Dumas that the ballet is technically based on, but I'm only looking at the original.)

As a work this story seems to consciously evade categorization. The story is a somewhat tongue-in-cheek fairy tale, a surrealist fantasy, with a story within a story that seems to want to mock the conventions of fairy tales but is still a fairly classic example. I found it intriguing throughout, but a bit exhausting to read.

The basics of the story are the basics of the ballet: Marie becomes obsessed with the Nutcracker that Godfather Drosselmeyer brings for Christmas, her brother damages it, mice attack her late at night and she is defended by the Nutcracker leading an army of dolls and toy soldiers. Then it gets a little more complicated. Drosselmeyer tells her a story of how a princess was turned into a hideous beast because of her foolish parents' feud with the Mouse Queen.  She is eventually rescued, but the curse rebounds on the young man doing the rescuing, and he is turned into the first nutcracker. Or something. Of course, Marie loves the Nutcracker despite how ugly he looks, and her love and fidelity helps him defeat the Mouse King (son of the Queen from before) and be restored. Maybe.

The story isn't actually that complicated, but there is a narrator with a sense of humor, and reality and fantasy are so interwoven that I had a hard time being sure whether certain words or names were errors in translation, typos in the book, or intentionally confusing or vague. Part of the confusion comes from that fact that often the children's playtime is described in terms that they might have used. For example, at one point Fritz (the brother) puts his new toy soldiers away, but what the text says is that the Hussars set up camp and went to bed.

This leads into the confusion of whether Marie's toys actually came alive and defended her from the mice, or not. The conclusion of the story seems to fall on the side that it doesn't matter, so long as Marie keeps faith with her interpretation of events.

The interlude in candyland is from the story, but it's a brief dream sequence that makes basically no sense.

I enjoyed reading the story, but ironically I'm not sure that one would have any reason to read it nowadays if not for the ballet. I am intrigued by allusions in the introduction to Hoffman as a very early writer of surreal fantasy stories, though. Maybe I will track down some of his other work.
Book Lindsay