It's a Wonderful Life? Not for that guy. 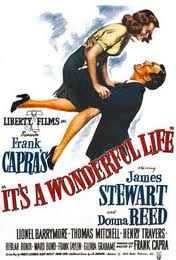 I haven't been feeling too Grinchy yet this year, but bashing It's a Wonderful Life feels like a good place to start. I have such oddly mixed feelings about this movie.

I appreciate the overt message: each of us touches others' lives in ways we can never imagine, and you don't have to have a perfect life for life to be worth living. I'm just not as fond of the packaging.

First off, of course I find all the beginning narration with the talking nebulas completely idiotic. I actually considered for a while whether the movie might be better without the supernatural elements, which is an odd idea for me. But Erin gave me a horrified look when I floated the idea by him, so I guess I can't say that.

It's well done. Well filmed, mostly well acted, parts were funny, but I just didn't enjoy watching the film. I found the pace slow, and the characters felt always on the edge of slapstick, never like real people. Like the people in Rockwell paintings: boring caricatures.

One of my main problems with It's a Wonderful Life was how oddly dated some aspects are, especially regarding the romance. I felt bad for George, trapped in a bad situation, but I thought Mary was sort of dumb to tie herself to a guy who was such a mess. There's no comeuppance for the villain - not even a little one that would have fit well in the plot - nor is their any acknowledgment that anyone but George sees how evil he is. It also bothered me a little that during the vision of the alternate present, George spent a lot of time wanting his life back, but not saying anything about wanting things to be better for anyone else. The film implied that plenty of people, among them the people he helped get housing, were worse off without George, but aside from his brother's death, George didn't seem to care about them, or even put two and two together.

Also, like many other reviewers, I liked Pottersville much more than the "real" world. I mean, to show how bad it was, the town had stores and bars open and bustling! Horrors!

I'm happy to have all the things that were inspired by It's a Wonderful Life, like Back to the Future, but in the end I'm ambivalent on the original.
40's Classic Comedy Fantasy Lindsay Movie Science Fiction