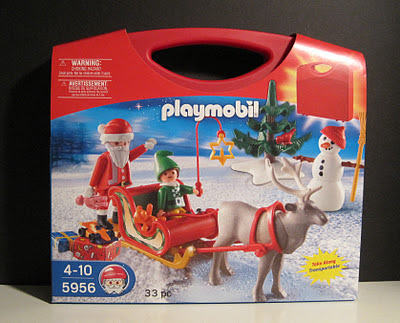 This is all this guy's fault. I saw that review and became obsessed with getting my hands on a Playmobile Santa. One trip to Toys R Us later, I had this carrying case, containing a slightly different Santa Claus, an elf, sleigh, reindeer, tree, snowman, and gifts. All for about $12.50, which seems pretty good in today's market. 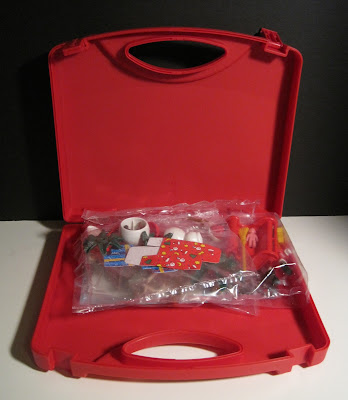 The case seems relatively sturdy. I'm not sure it's going to be much use to me, but it never hurts having storage options around. The biggest surprise for me was the sheer number of pieces and amount of construction required. The figures come mostly complete (other than their hats), but just about everything else requires some work. 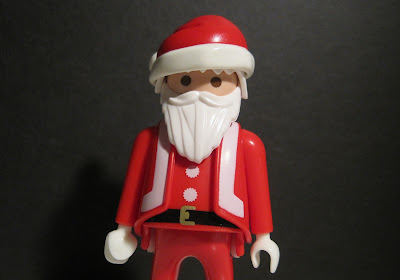 Here's the main man, Santa Claus. I like this figure overall, though I'd have preferred the other version for the beard. Still, this is kind of awesome. The arms, wrists, and neck move, and the figure's legs move in unison, allowing him to sit. In addition, his beard has a little articulation, helping it stay out of the way when you're turning his head. 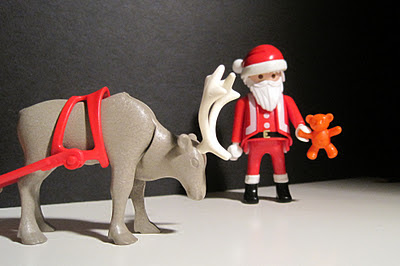 I really love the reindeer. There's just one joint, allowing the reindeer to  look up or down, but it works incredibly well. 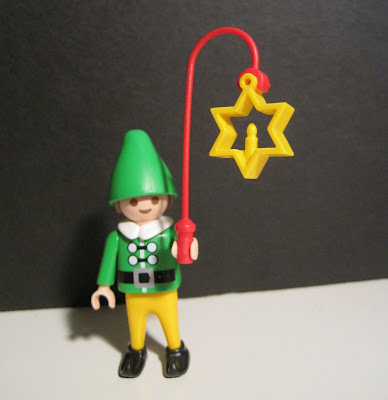 The elf has the same basic articulation as Santa (and, as far as I know, pretty much every Playmobile figure out there). 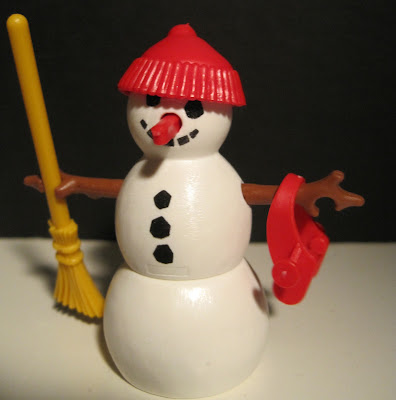 My only complaint with this set is with this guy. While he looks fantastic, mine seems to be missing his carrot nose (I've substituted a red peg above). There's a chance I might have missed it while unpacking the figure, but I kind of doubt it (I was pretty careful). Besides, this set has an extra harness that's a little smaller than the main one. I'm betting they got switched in the factory somehow. It's a shame, because it mars an otherwise fantastic piece. 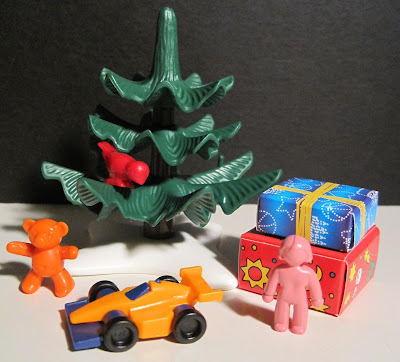 Here are the other assorted accessories. The race car required assembly - despite its small size, it started in four pieces that had to be snapped together. The presents are made of cardboard and likewise needed to be put together. 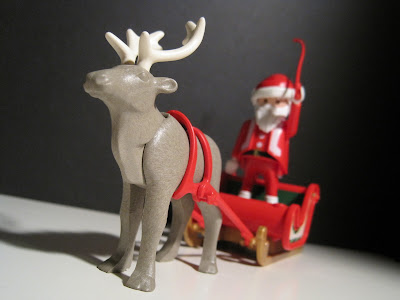 The sleigh is awfully cool. Once again, there were a number of pieces, as well as a few decals, one of which covers a peg, meaning there's no easy way to disassemble this without damaging it. Not that you'd really need to, mind you.

Playmobile is, of course, incredibly stylized. Personally, I like that style, and really like this Santa. The only disappointment here is the missing carrot nose, which is pretty minor, all things considered. Given how expensive some toys are getting, this feels like a bargain at $12.50.
Erin Snyder Toy