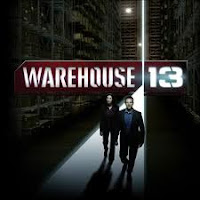 Let me start by saying I didn't know anything about this show going into this episode, other than that it's sort of The Last Scene of Raiders of the Lost Ark: The Series. What I knew by the end is that it's really just that: a series of wacky adventures based loosely on a bunch of made-up magical artifacts based even more loosely on historical figures and events. (I have since watched another, more recent episode, which sucked much less than this one.)

This Christmas episode features a cynical banker-type being tormented by a spectral Santa, who threatens to make him “disappear” unless he changes his ways. There's a sub plot about reuniting another character with his father. It's not boring, but all of the plot turns are horribly cliché and I just want to smack all of these characters for overacting and being morons.

The dialogue is fairly clunky, although the cheesy B-grade CG special effects amuse me. There's some decent use of silly creepy Christmas music, but the sitcom setups make me cringe too much to really enjoy the ridiculousness. I don't always hate the chick with the fun hair highlights, but when she's annoying, she's the worst of them.

If you can bring yourself not to hate these characters, this is an amusing episode, and I think maybe I would be amused by other episodes of this series, but as Christmas episodes go, this falls pretty flat.