Make Your Own Hallmark Keepsake Ornaments

By Erin Snyder - December 02, 2011
Okay, I think we can all agree that Hallmark makes some cool Christmas ornaments. If you don't agree with this statement, then you probably haven't been to a Hallmark store in a while, which really isn't something you need to be embarrassed about (in fact, it's a sign of good character).

But, like it or not, Hallmark produces some extremely awesome pop-culture ornaments. Unfortunately, they charge a crap load of money for the things. We're talking $17 for the "cheap" ones and $35 if you want something with lights and music.

Or you could make your own, in just three easy steps.

1. Go to Toys R Us (or Walmart, Target, or any other large, corporate owned superstore) and buy some toys. It doesn't really matter what you buy, so long as it's small, from a recognizable property, and isn't too expensive.

Here are several examples I found lying around my apartment. 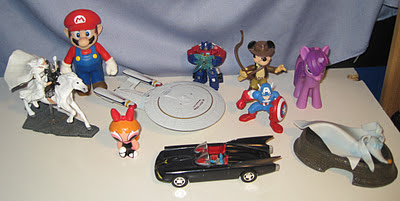 You don't have to worry about being consistent in terms of style, size, or anything else: Hallmark certainly isn't. Just try and avoid toys that are too large or have obvious joints. Other than that, the only thing all the above toys have in common is that they were purchased for less than it would have cost to buy a goddamn Hallmark Keepsake Ornament.

2. Buy a bunch of jump rings and attach them to the toys. Surprisingly, you're not done yet.

3. Store your ornaments in an expensive glass display case. Tell people that you collect Hallmark ornaments. Never let anyone touch them. Now you're done.

OPTIONAL:
Some Hallmark ornaments have electronic lights, sounds, and motors. If you want these higher priced ornaments in your collection, you'll need to do a little more work.

Head down to your local RadioShack and buy some small buttons. Glue one to the ornament in question. Provided you're following rule #3, this should be fine. If someone does get into your ornament collection and try the buttons, just explain that you remove the batteries to prevent the corrosive acid from damaging the electronics.
Crafts Erin Snyder Instructions