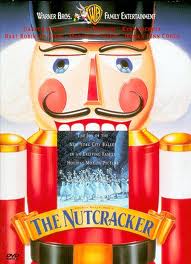 Hey, it turns out that totally by accident we saved the best for last! First we saw the pretty mediocre Nutcracker: The Movie, then a version with pluses and minuses starring Mikhail Baryshnikov. This one, though, was definitely our favorite. I should mention here at the front that one of the stars is Macaulay Culkin. It was good anyway, I promise.

That's not to say it doesn't still have some problems, but the balance between film and stage is much better here. This one was actually enjoyable to watch for the whole first half!

The first act is very strong. Stage magic is used instead of movie magic 99% of the time, the camera angles are well chosen, the makeup works in closeup, and overall the balance between movie-realism and the stylized nature of ballet is very well handled.

The costumes and sets are great, but most important of all, it's well shot. Plus there's a plot! Sort of. The young dancers are surprisingly good. Drosselmeyer is fun, the story, such as it is, actually follows fairly sensibly, and the additional information given by narrator Kevin Kline isn't too grating or obvious.

Things start to stagnate a little in the second half, but frankly, the second half of The Nutcracker is boring the way it's written. The group numbers are quite nice, but I found the soloists' choreography mostly uninspired and dull. Plus the Cavalier definitely needs a better costumer. (White dance belt under thin tights equals awkwardness for everyone involved.)

I still thought this was the most fun Nutcracker we've seen on film. Personally, I really like that the girl and the Nutcracker are played by kids: it gives the whole thing a better vibe, more Christmassy, more magical. It does kind of break the structure of the end though, so I understand why a lot of versions change it.

If you're looking for a Nutcracker on film, I don't know that you can do better than this. Ballet is always better live, but this is really fun, at least for the first 45 minutes.
90's Dance Fantasy Lindsay Movie