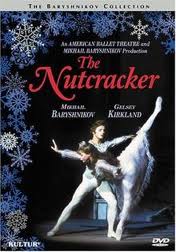 Overall, this is a better version of The Nutcracker, but it still isn't great.

After our experiences with Nutcracker: The Motion Picture, I was leery of anything that crossed the line between filming a stage production and making a movie. This special made this error less, but I yelled at the screen several times anyway. “Stop with the poor special effects and just film the dancing!”or something. Maybe Erin recalls, I was somewhat incoherent in my frustration.

Happily, when they did film the dancing here, the dancing is very strong. The costumes were better, the choreography was better, it was just overall better done than the blatant cheesiness of the first one we watched.

Now, there are a few aspects of the costuming that make it clear that this is ballet, filmed in the 1970's. There is no hiding of bodies, no shying away from ridiculously tight shiny pants. So be aware of that.

This version does actually manage to get across my favorite thing about professional ballet: that it should be amazing, and look effortless. The leaps and poses and lifts make the dancers look weightless, almost inhuman. I often think of this style as something I want more of in superhero movies: superhuman physicality, that looks completely natural.

Of course, all this great dancing doesn't quite save it from the fact that The Nutcracker is a pretty boring ballet. However, I did find using Drosslemeyer near the end to draw Clara back from the dream world to reality, whether she would or no, to be a haunting sequence. And all the better for not being explained, or completely clear.

One more thing: I found another great review of this piece here for your reading enjoyment.
70's Dance Fantasy Lindsay Special