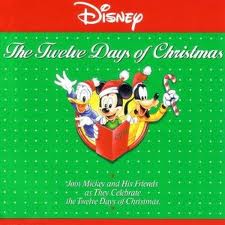 I'm sure that if I didn't have memories of this album, I would find it pretty weird. I mean, it is really cornball. However, I do have fond memories of listening to this music as a kid, so now I find it charmingly cornball, rather than annoyingly so.

This is an album with a premise: a bunch of Disney characters get together to practice caroling, then they decide that they're going to actually celebrate Twelve Days of Christmas with a new activity each day. Most of the songs are prefaced by a little riff of "On the ____ day of Christmas, we play in the snow/go shopping/visit Santa/etc." It's odd today to listen to an album like this, which is heavily designed to be listened to in order, which was easier on the cassette tape of this I had originally than it is on my iPod.

So all the songs are sung by actors (there are few specific credits on the CD, just a list of Vocals By:...) doing character voices, backed up by a studio choir keeping them on key. The professional singers are given an in-character explanation in the first track, when Scrooge introduces them as "The Duckburg Glee Club." Uh-huh.

It's a rather amusing mix of standards and original songs:

About the Songs:
I really enjoy quite a few of the more unique tracks, several of which, so far as I can tell, are original to this recording, or at least copyrighted to Disney's music department. Sleigh Ride Through the Snow is a fun one of these: upbeat and charming, similar to existing holiday songs while not retreading the same exact ground. I also particularly like Downtown Holiday Hullabaloo: a song about shopping, crowds and decorations, in a pattery imitation boogie-woogie style. In He Delivers, Huey, Dewey and Louie sing about how awesome Santa is, and Dear Santa earlier on the disc is a rather silly celebration of wish lists.

As far as the traditionals go, doing Santa Claus is Coming to Town as a brassy quick-march brings a brightness that song often lacks. Twelve Days and Deck the Halls are passable, if nothing special.

Around the World Christmas and A Gift of Love are both pretty sappy (and mostly sung by the choir), but, I don't know, it doesn't really bother me here. Those are lightened by the character commentary here and there. All of the tracks are at least a little cutesy, full of character asides commenting on the songs or the singing, or setting up the next sequence.

The final track is a little reprise in which they sing back over their twelve fun days and bid farewell and Merry Christmas to the listeners.

I think this album is cute and amusing, but it's really heavy on the Disney cheese, that "golly-gosh isn't it swell to all be here for the holidays" sort of stuff. You have to be ready for that if you want to brave this album.

Well, see for yourself: